I’m currently in the middle of taking a podcast workshop from Seth Godin.

For years now, especially after I’d speak on stage at events, people would come up to me and tell me I needed to podcast.

But I never knew what I’d talk about, at least until I started writing my book. It’s called Permission to Kick Ass and it’s about screwing up the courage to leave a job and start your own creative entrepreneurial journey.

And for the last week, week and a half… things were going pretty smoothly. My cohort LOVES the concept. They gave great feedback on my description and my dream guest list. They even REALLY enjoyed my sample Zoom call recording with my best friend. We ranted about virtual Dungeons and Dragons, and it was great.

But then I hit a wall when they challenged me to try recording on Skype.

Here’s what went down –

I had a list of folks I’d asked to be guinea pigs for my practice recordings. I found two who were available to practice my Skype recordings on.

I spent the morning getting reacquainted with Skype (henceforth, it shall be known as my arch-nemesis) and getting familiar with Callnote (the recommended recording software).

I noticed on launching Callnote that the screen was different from the training recording I’d watched earlier – the training had a “Connect” button to sync up Skype and Callnote. But when I launched Callnote, it had this weird popup: 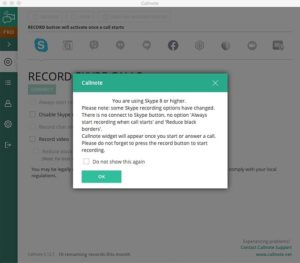 It was a little confusing, but it said I could record through the widget, and the widget popped up automatically when I opened Skype… so I assumed it was all working as it should.

So I called friend #1 and we had an awesome 10-minute chat about public speaking, and overcoming those fears.

Here’s the thing – before recording, I triple-checked all the audio inputs. I spoke a little with her before hitting record, so I could make sure we were hearing each other alright. I hit record and we were off to the races.

Callnote did not record me AT ALL. It picked her up just fine, but nothing as far as my voice. I was completely baffled since she could hear me, and the software could hear her.

So I was frustrated, but decided to practice on friend #2 and asked if he’d be willing to help. We hopped on and had a lovely 6 minute conversation about skydiving, and overcoming a fear of heights.

I thought this time, in case the same thing happens, I’ll run Screencast-O-Matic over the top of this and set it to capture my computer audio and my mic, so that if Callnote is weird again, at least I’ll have both sides of the convo.

Clearly this is something happening on my end, but I was utterly BAFFLED as to how my interviewees could hear me, but I didn’t make it on the recording, even after checking every audio input I could to make sure it was running through my USB mic.

I posted a modified version of the above story to my podcasting cohort, and wrapped up with this:

Ideas? Willing guinea pigs? Should I just throw it out the window and set it on fire? Just stick to Zoom because that experience was a total one-and-done when I played around with it yesterday?

Phew… did I kick over a hill of ants. Turns out I wasn’t the only one who was epically frustrated with the Skype assignment. I was just one of the first to actually voice it.

I think at one point all the coaches and half my cohort were either commenting on that thread or referencing it in another thread.

And aside from making me feel a little less dumb… I had two takeaways I thought might help anyone else who’s learning to do a new thing.

Too often we get so drawn into those challenges, and so frustrated by our inability to JUST FREAKING FIX IT ALREADY, that we can’t see there’s always another solution… don’t use this option. Find another one that’s easier and that won’t make you want to punch things.

Especially these days when it seems like people are looking for an excuse to fly off the handle and RAGE (even if they look like absolute morons,recorded on camera for the world to see)… just because a feeling is happening doesn’t mean you have to let it control you or your business or your decision making.

Have you ever had something in your business (or in your life) that drove you to the brink of burning it all down and starting new? Tell me your stories – I need to be not the only one feeling this way this week… LOL.

Posted in Getting started, Mindset