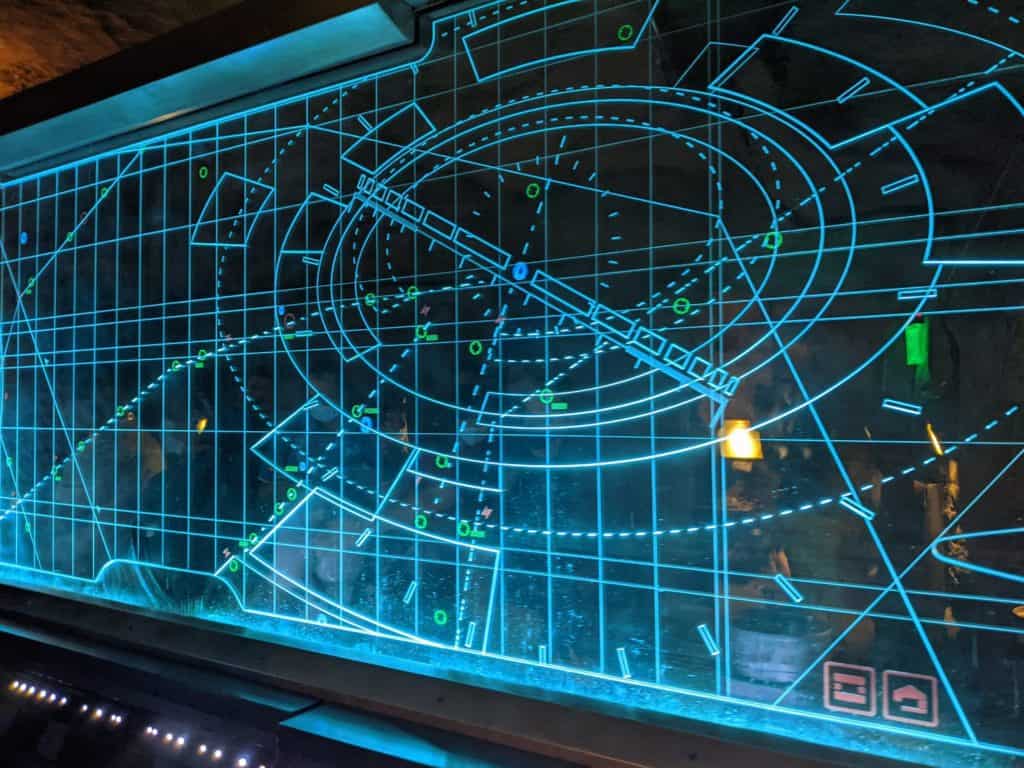 When we left off I’d just made it into Hollywood Studios after nearly high fiving a lady after she threatened her romantic partner for complaining.

It was a Saturday and therefore a little busy. Part of my mission included scoring some 50th anniversary gear as well as riding rides… so I meandered through shops while the crowd made a mad dash for Star Wars Land.

It was also my first time trying out the new Genie+ feature of the My Disney app. I’d heard so much about it from perusing the various Disney nerd blogs, so decided to give it a go.

Verdict: meh. The algorithm could use some tweaking. I’d love to be able to book Lightning Lane rides by time or location vs having to scroll through a massive dump of rides in no particular logical order. I’d also like to see time options for different rides vs being shown only one window that is 2-3 hours from now.

From what I’ve seen, it’s trying to be like the Touring Plans app but not quite there yet in terms of optimizing the actual schedule of the day.

The first thing I did was ride the Alien Swirling Saucers. I remember waiting in line and seeing a young child, maybe 4 or 5, who was distracted and playing on all the stanchions.

He didn’t immediately move forward when the line did, and his mom would look at me apologetically as she desperately tried to convince her son to move. The third or fourth time it happened I assured her…

“Hey he’s having the time of his life playing in line… imagine how much fun he’s gonna have when he gets on the actual ride! It’s all good… who cares if he’s not immediately moving forward? We’ll all get there.”

We did in fact make it to the front, and even though I was riding solo, I had a blast leaning into every turn and shrieking as the car accelerated and whipped around. 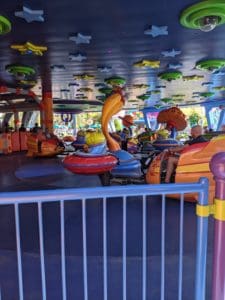 Getting close to the Swirling Saucers 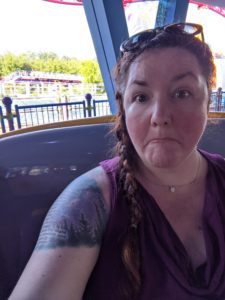 About to lean into those swings SO hardcore

Then I realized the line was open for Rise of the Resistance and hopped in. It’d been closed for the first hour or two that morning… so I was taking no chances. Even though it took about two hours to get through the line, it definitely something you should experience, especially if you’re a Star Wars fan. 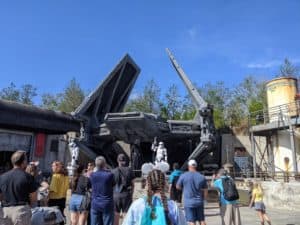 Just some baddies. No big deal. 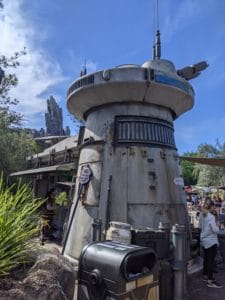 About to enter the 2-hour line 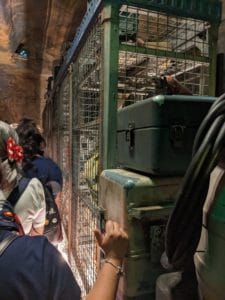 Some cool design/detail stuff from inside Rise of the Resistance 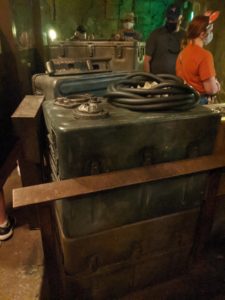 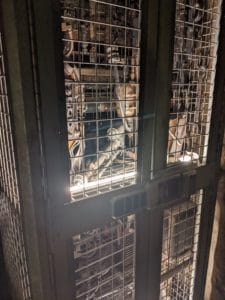 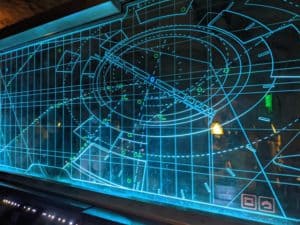 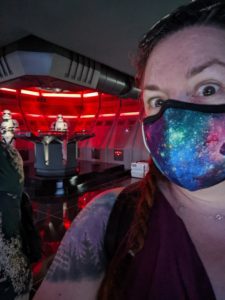 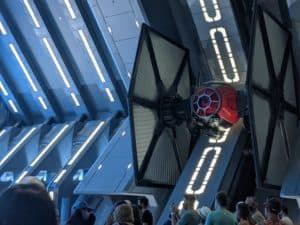 This is part of the ride, which is kinda cool 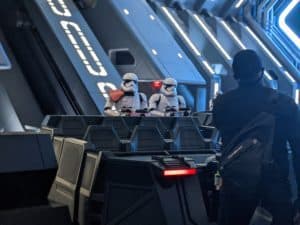 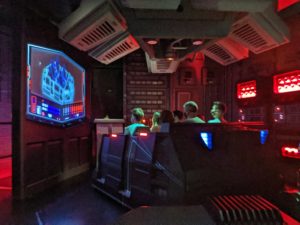 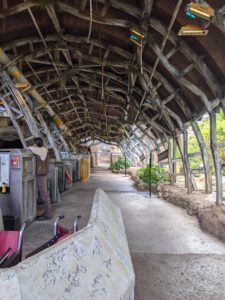 End of the ride scenery

About the time I was done with Rise of the Resistance, my stomach announced it was time for lunch… which is how I met Gail and Marilyn.

I’d just grabbed some food at Woody’s Lunchbox (and yes, people were stopping me to ask where to get these totchos):

Unfortunately for me and my totchos, there was NOWHERE to sit… not at Woody’s Lunchbox, not anywhere nearby in Toy Story Land. I searched a few minutes in vain, so me and my tray headed to the next world over, Star Wars Land.

Bonus: eating food that is literally from another universe.

I found a giant concrete block at approximate sitting height, so I sat with my tray and set about starting the feast. 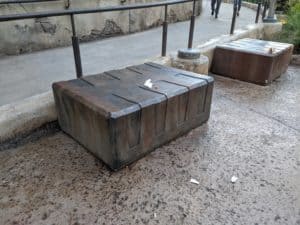 Not the block I sat at, but adequate for demonstration purposes (minus the trash)

I’m sure if they could have skidded in sideways or screeched to a halt, they would have… it was clear these two were having a grand ol’ time.

Once stopped, they leaned back and propped up their feet, loudly proclaiming how good it felt to kick back. I smiled and tore into the food and one, Gail, eventually nodded toward me and apologized for how they’d invaded my space.

Given I was siting on a giant block and my tray and I only took up a third of it,  I told them no worries and they were welcome at my “table”.

We got to talking about life and why each of us was here. Turns out Gail and Marilyn had brought their daughters and granddaughters -it was a multigenerational trip.

“I sure am not looking forward to going back to the snow!” Yelled Marilyn as they wondered aloud where the rest of their family was.

They asked me why I was at Disney and I mentioned it was a celebration – one year ago today I left my keys and furniture and most of what I owned with my ex, packed up Stella, and hit the road.

When they asked where I was going next, I told them I was heading home for the holidays and then heading out west. My plan for 2021 is loosely New Mexico, Arizona, SoCal, NorCal, Oregon, Washington… and then???

Marilyn insisted I had to go to Sedona, swearing I’d experience a spiritual awakening.

As she was raving about the scenery and trying to remember some of the sights she’d seen, the two daughters came up with a stack of Mickey pretzels.

As we ate, Heather and I got to talking about pets and what it’s like traveling with a cat. She told me about her “zoo” of rescue animals and how they are so smart they had to have been reincarnated many many times.

“I think the dumb ones (people) have a few more lives to go before they get to do something fun like be a dog,” she said. Amen, sister.

Gail and I got to talking about relationships and finding the courage to go on adventures by yourself. It came out that my first real “I wouldn’t normally do this” adventure was sitting naked in a hot tub, alone in the mountains… for no particular reason at all.

She held out her now-empty drink and toasted me, telling me she felt like we were spiritual sisters.

“Hey when’s your birthday?” she popped off. I told her it was December 1, and she said hers was coming up on the 23rd – and that she’d known all along I had to be a fire sign.

By that time a storm had started to roll in and Marilyn had rolled off in search of shelter. Carla and Heather followed shortly after.

Before she took off, Gail told me how she’d been happily divorced for many years – and that whatever worked for me was what will be.

We hugged and said goodbye, toasting to meeting again in Sedona someday…