So last night I got stuck behind a SLOW AFFFFFFFFFFFFFF driver.

Ordinarily it wouldn’t bug me since driving for long stretches is just a thing I do now.

But this was on a back country road in the dark (vs a major highway with a bunch of lanes), so I found myself getting more and more frustrated that I couldn’t go as fast as I wanted.

And OF COURSE, this slow asshole ran a yellow light… leaving me stuck at the red light.

The longer I sat at that red light, the further he got away.

At that point, I was at my own crossroads (literally AND figuratively)…

I could have gotten pissy about how OF COURSE he got through the light and I was stuck.

But by getting further ahead of me as I sat at the light… he was also giving me a longer runway to go as fast as I wanted once that light turned green.

It can be the same in business, when we want everything to happen OMFGRIGHTNOW. But sometimes you get stuck behind something (like a knowledge gap) or someone (like a busy prospective client) that forces you to go slower than you want.

You could look at those blockers as signs you weren’t meant to do this. You could also waste time (and energy) getting pissed off that things aren’t going your way.

But sometimes the best thing you can do is to stop, take a few deep breaths, adjust the attitude, and get started again once you’ve got a little more open road in front of you.

The point is, you get to choose how you feel. And sometimes that makes a BIG difference in how things turn out.

Speaking of choosing how to feel…

Check out the podcast…

Last week Ross O’Lochlainn stopped by to talk about working toward saving up to leave a job, and then being let go because of a visa issue… which left him unemployed (and unemployable) in a foreign country.

BONUS: if you need even MORE Angie in your ear holes this week, I appeared on a very awesome podcast episode by The Copywriter Club this week.

In just about 90 minutes, Kira, Rob, and I managed to get through my pretty epic decade-plus copywriting career. If you want to know how a self-taught copywriter leveraged minimal writing experience into a full-fledged career, click here to listen. (Lots of good tactical and mindset talk in that one, by the way!)

Ever get in a fight with a storm door and lose?

Yeah, that happened to me last night. I was trying to keep it from closing on me and my armload of stuff with ye olde “kick the leg out behind you without looking” trick.

Turns out I kicked the leg juuuuuuuuuuuuuust slightly under the storm door, leading it to attack and wreak havoc on my Achilles tendon.

Don’t worry, I won’t torture you with pictures. And nothing seriously hurt (aside from my pride).

Instead, here’s a gratuitous (slightly blurry) picture of Stella proving that cat traps boxes work for luring in cats: 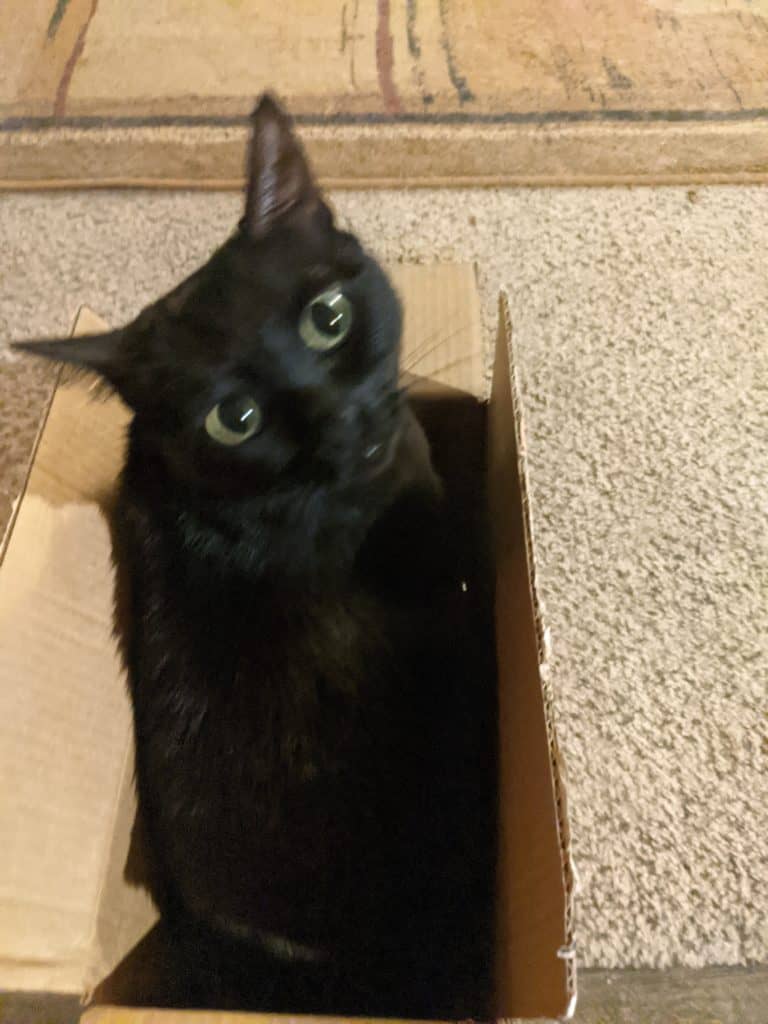 Pic is of my cat Stella squeezing herself into an Amazon box that’s probably one size too small to really hold her well.

In other news, I just posted a great story to the blog… it’s all about my recent trip to Disney World.

Part one (including murder threats and an unfortunate anniversary) is here.

Harkening aaaaaaaaaaaaaaallll the way back to the beginning of this email… attitude adjustment gets a lot easier with the proper upbeat tunes.

As I was gearing up to get good and pissed at the slow driver, Low Rider came on and led to an impromptu car karaoke party. So that’s officially the song of the week. You’re welcome.