stepping into someone’s head as a copywriter

This week I got a question:

When you’re writing copy, how do you find the balance between being true to the company’s voice but also bringing your own ideas/slant? Had this challenge before when I was hired based on very ‘me’ samples specifically written for that company, but when it actually came to writing a campaign they basically wanted exactly what they had before.

Here’s how I approach it when I have to write as not-Angie:

I come up with the logic and the ideas. Then I run it through a series of filters –

For one of my big clients, I like to joke that I have a “version of him in my head”. He reads things I write back to me, and I can hear when his voice switches to mine, or to another person on the team who’s tried to write as him.

When I’m not sure how the client would say it, I get the piece I’m writing thing as close as I can get it to done. Then I highlight or flag (with a comment) the part I’m struggling with, and explain to them – “right here, I’d love your help in nailing the wording. Here’s how I want to say it – does that feel authentic to you?”

The part I think most newer copywriters struggle with is… yes, the client DID hire you for your personality and your creativity.

They clearly love that part of you and want to add some of that to what they’re doing (or they think they want to and then get uncomfortable with it when they see it in execution – happens a lot. That’s a different story for another day).

But they didn’t necessarily hire you to write AS YOU. They hired You-the-creative-copywriter to write as THEM. So think of it like stepping into character and playing a part.

Can you see the difference?

The community just wrapped up an email writing challenge – the assignment was to write an automated “welcome” email that was almost over-the-top fun and full of personality. 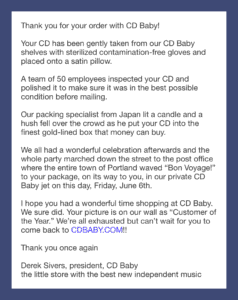 This is probably one of the most ripped-off emails of all time.

And in Copy Chief, we challenged our members to model a welcome email on this kind of fun, over-the-top, enthusiastic email.

Since I’m a well-known member, I got drafted into a starring role in many of the emails (LOL).

One member had me bouncing like Tigger and yelling about perseverance, and that didn’t sit well with me.

There were a few things at work there – he was a new member and I don’t know if he knew (before I pointed it out) that the Angie most folks were referring to was me (hey! I’m an actual person and not a character!), and that the outlandish stories they’re making up about me are for the most part based on something they’ve seen me do on video or in person.

But I had a very visceral reaction to being portrayed in a way that didn’t feel like me. I’m more likely to kick open the door holding a bottle of vodka and yell TIME FOR SHOTS MOTHERFUCKER.

And it’s not like he got me entirely wrong – because I’m also known for being everybody’s biggest cheerleader and ranting at length about your potential. But I’m way closer to Samuel L. Motherfuckin’ Jackson in tone and approach than I am to Mary Poppins… and people are deeply tied to their identities.

So yeah, as a copywriter you often have to play the part of someone else. It doesn’t mean the client doesn’t value your voice – it’s that they need help articulating their thoughts and reaching their people in THEIR voice.

To do that WELL, you have to study them… devour every video, every podcast, everything they’ve ever written. Crawl inside their head and try to figure out how their thought process is different from yours, how it’s similar to yours.

Note the words and phrases they use, the weird little grammar tics they have (sooooooooooo many people write in to me griping about my use of “here’s some stuff” and frankly my dear, I don’t give a damn. It’s how I talk).

I’ve noticed that great copywriters, great marketers are lifelong students. It’s not enough to “get good” and then coast for most of the copywriters and marketing strategists I know.

These are folks who almost instinctively learn from every interaction, every email sent, every new tactic out there. And they’ll even go back and dig into older tactics that were once effective and could well work again.

One of my good friends, April Dykman, teaches people how to study copy in a way that helps you get good. (Her group is called Control Freaks – a play on words I FREAKING LOVE because the sales letter that makes the most sales is known as a “control” – for those of you who didn’t already know.)

In that group she regularly breaks down promotions that have made millions upon millions of dollars, crawling into the thought process of the writer and figuring out exactly what made it so successful.

She’s about to start a free 5-day challenge – you can find out more about the challenge by joining her group here: https://www.facebook.com/groups/copywritercontrolfreaks/