I won’t ever forget it… 2013. John Carlton’s Action Seminar.

My first conference as an aspiring copywriter.

Not too long ago, John Carlton posted those pictures from his event on Facebook (linked in the first line, above). At the time, he was simply a legendary copywriter I’ve admired from afar for years.

More recently, I had the extreme pleasure of jamming with him on stage at Copy Chief Live while dressed as the Evil Queen from Snow White. No, I’m not making that up. I have photographic proof! 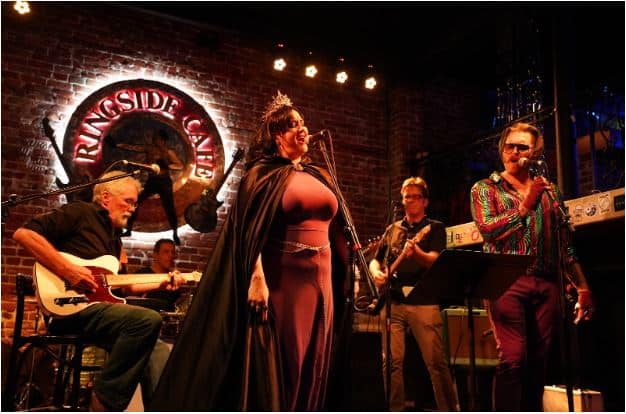 At any rate, in 2013 John held his Action Seminar in San Diego. At the time, I was a broke copywriter living in Northern California – about a 6-hour drive or a completely unaffordable flight from SFO to LAX.

I was SLIGHTLY successful – in that I’d proven my skills enough to land a part-time job as an in-house copywriter. It paid the bills, but not much more than that.

So when I saw John’s announcement, I KNEW I wanted to go. I also knew I had no money to actually get myself there.

I was jealous of all my internet copywriter friends from the Warrior Forum… they were proudly announcing they’d be there.

I’d gotten myself as far as I could go, trying to figure out this copywriting thing alone. I’d done pretty damn good for someone who is self-taught, and started down this path without any formal training, after reading a book.

I think this might even be the first time I’m telling this story publicly – because back then the Warrior Forum was all about posturing (read: dick slinging). There was no way in hell I was letting people know I was broke and couldn’t make it – my pride wouldn’t allow it.

I needed them to know that this feisty, foul-mouthed redhead was a WINNER – and the way to do that (in my twisted logic) was to show up and pretend like everything was fine, like I had this copywriting thing figured. The fuck. Out.

But rational Angie wasn’t about to go into debt to get there – so what’s a girl to do?

So I did the only thing that made sense to me… I’d raise the money to pay for the ticket and travel expenses.

Back then, crowdfunding was just coming onto the scene. It wasn’t quite the behemoth it’s become, with everyone and their mom begging for money online.

In 2013, there were basically two platforms: Kickstarter and IndieGoGo. And on both those platforms, you essentially had to give donors something of value in exchange for their donation.

The primary difference was that Kickstarter would only give you the money if you hit your target. IndieGoGo would still fund you a partial amount if you didn’t hit your goal… so I chose them.

I’m sharing that campaign with you now on the solemn condition that you not laugh and/or cringe: https://www.indiegogo.com/projects/help-a-rockstar-copywriter-get-to-the-show-of-all-shows#/

I did what I felt I had to in order to get to where I knew I needed to be.

And the most interesting thing that happened? The amount of money I raised OUTSIDE this platform.

I edited blog posts. I wrote press releases. I did email sequences and web pages. I wrote product descriptions for Etsy stores.

You can see from the results I made almost 120% of what I asked for.

When you add in all the money I brought in from 1:1 deals made with local friends and business owners, that number skyrockets to almost $2k or 250% of my initial funding request.

If I had to guess, I’d say because a special kind of magic happens when you screw up the courage to put yourself out there and ask for what you want.

I did what I needed to in order to get there, but I didn’t beg. I showed people how badly I wanted it.

And I think people could see how badly I wanted it… so they started reaching out to me to tell me they didn’t have a need for what I’d offered, but could I help them with something else?

This whole experience taught me a few things:

1) when you dare to put your wishes/dreams/desires out there and show the world you’re working for it, the universe has a way of helping you make things happen.

2) you probably need 2-3x the amount of money you think in order to make a trip like this. I’m glad I accidentally made that amount because otherwise I would have gone into debt. Even then, the trip still would have been worth it and that’s because…

3) I proved to myself that I could sell… that I could make money appear out of the ether, even if I didn’t have an actual product or service, and even when I was being a little silly/facetious.

Because I sold myself and my dream and my services, I proved the freelance model – offer something people value and they’ll pay for it. Even if the only value offered is “I helped you achieve your goal because I care about you”.

That gave me the confidence to get to that conference and start conversations with people (read: posture), that ultimately led to me landing a $2500 project that more than paid for the entire trip. At the time, that was the most I’d ever charged for a project.

While there, I met (and awkwardly stalked around the bar) a pretty damn cool speaker by the name of Kevin Rogers.

I liked what he had to say and started following him. A few years later, I’d join Kevin’s Copy Chief community… which had a drastic and immeasurable impact on my career.

It literally took off like a rocket after that.

And I couldn’t have planned for any of that. I didn’t (and still don’t) have the ability to look into the future and figure out what the personal impact/value each decision will be.

I was only following my gut – making the next right choice for me and my business.

Sometimes that makes all the difference.