Subtitled: “My nuts are poppin’ today!”

A few words typed into Google Maps and that’s how I happened upon Beale Sweets Sugar Shack. I’d just wrapped up lunch and had a hankering for something sweet, so might as well find something in walking distance, right?

I look for local places, wherever possible – so this one, not being a chain, caught my eye. It looked to be about candy but I decided since it was about a block away, it was worth a lookie-loo.

As I closed in on it, I could smell the cinnamon-sugar through my face mask. Imagine Looney Tunes floating through the air after a delectable smell – yeah that was me, with less floating and more walk-shuffling. 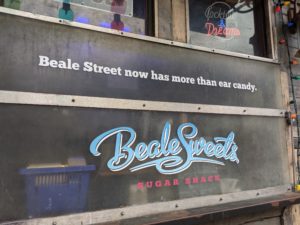 The smell was the owner, Beatrice, making some cinnamon-sugar coated almonds, which have been a favorite of mine ever since I first tried them out at Disney World.

She was on her phone when I first came in so I started looking around – and it looked like a typical candy and souvenir shop. Lots of Bob Ross socks thrown in among the taffies and tins of commercial candies. 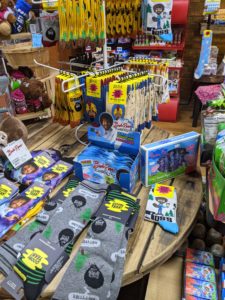 As I was browsing someone else came in, asking about “that heavenly smell”. Without missing a beat, Beatrice said, “I just took a shower. No, kidding. You’re smelling my nuts.”

Under my mask, I was smirking… perusing the sweets and snapping a pic of the Bob Ross socks so I could show my friends.

She kept it up as I wandered. “Yeah people often ask about that smell. That’s just my nuts, they’re really poppin’ today.” She knew exactly what she was saying and kept grinning as she rattled off her one-liners.

I asked her to help me get some candy out of the bulk bins – COVID regulations meant she had to sanitize, glove up, and get it for me vs letting me help myself. I wanted some dark chocolate sea salt caramels – and I didn’t know she’d made them herself.

She insisted I try one, but told me I had to slow my roll. “Shut your mouth and let it melt – don’t immediately start in with the chewing, this one was meant to savor.”

She was right, of course. I let it slowly melt and gestured at her to add several more to my bag. 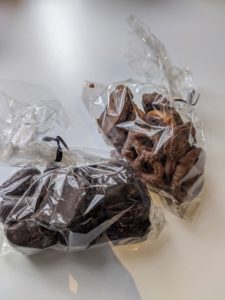 Then on to chocolate covered pretzels, then some Skittles and Peanut Butter M&Ms to have on hand whenever the sweet tooth hits. I like buying in bulk because I can get just a taste vs buying an industrial sized bag o’ sugar. One of my favorite reasons to go to Party City is because I can plop down 50 cents and get 10 pieces of mix and match candy. 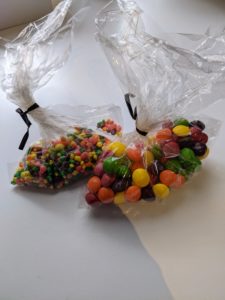 I digress – loaded up on candy, it’s time to check out. That’s when I saw it… the fudge counter. I asked if she did samples and as she finished wrapping up my caramels, she told me she was a master chocolatier and had a PhD and BS – in that order. She kept emphasizing BS, which made me smile all the more. 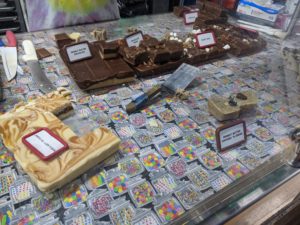 I asked her to cut me off a piece of the peanut butter cookies and cream fudge. As she did, she told me about how she sold them, offered a mix-and-match set.

I told her I was curious about one called “God’s Gift to Fudge” and she told me it was her praline recipe, and one of her most popular sellers. She insisted on cutting me a piece of that and said, “now don’t you DARE chew that. Put it in your mouth and SUCK.”

I tried not to choke on my laughter. She was right – it was good. Indescribably good. I asked her for a square of peanut butter chocolate fudge, and a square of God’s Gift. She insisted on cutting me center pieces, which she “doesn’t do for just anyone”.

As she worked on packaging them up she was telling me about other varieties she offers, like “Blue Suede Shoes”… “tastes like Banana Laffy Taffy,” she told me, as she showed me a magazine where she’d been featured in a 4-page writeup.

She had another one she called “Taste the Rainbow” – “It’s got like 6 layers and it tastes just like Skittles,” she told me.

Then she mentioned “Unicorn Poop”

I’d seen a glittery rainbowy mix of stars and moons in the bulk candy section and asked, “oh so do you make it with that?” She explained that it usually had cotton candy and marshmallows, was topped with the Unicorn Poop bulk candy plus disco glitter.

I told her my best friend would love all the rainbow stuff, and shared a story about the time we lost a rainbow fanny pack at Disney World and went on a mission to retrieve it. I told Beatrice my friend really loves rainbows and anything gay pride.

“Oh you’ve gotta give them some gay bacon!” she exclaimed, running out from behind the counter to get a piece of rainbow-looking sour candy ribbon, which she insisted on wrapping up for my friend, all nice and special. 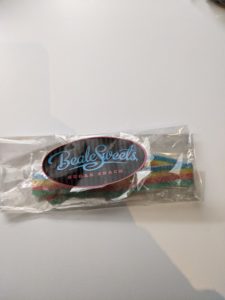 “I didn’t come up with that,” she said. There was this lovely couple in here once and we were talking about sour candies and I showed them this and one of them yelled, ‘Oh my god, it’s gay bacon!’ and I kinda loved it ever since.”

As she wrapped up the last of my now massive candy order, she started spouting off dirty jokes – my fave. What are the cheapest nuts? Deer nuts… they’re under a buck. What does a perverted frog say? Rub it, rub it. Do you know what moth balls smell like? Yeah? How’d you get them to open their legs?

Right before she rang me up she made me hold up my right hand and solemnly swear I would NEVER EVER refrigerate her fudge. And that I’d never EVER put those squares in an airtight container, because she uses high quality ingredients with no preservatives and putting her fudge in the fridge is a sin against good chocolate. 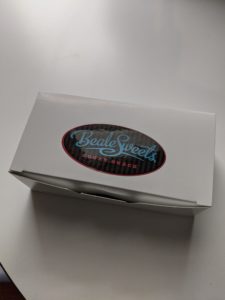 We were laughing so hard by the end of it, she told me “man you’re really cracking up”. I told her “yeah the jokes are cracking me up, and I’m also thinking ‘oh when I get where I’m going I’m writing ALL of this down.’”

All of this happened in the space of maybe 10 minutes but it really made my day. Thank you for coming to my TED talk and if you have a sweet tooth maybe go see Beatrice and tell her I sent you for the ball jokes and the fudge.