I’ve been struggling a lot with focus lately. It’s to the point that even my trusty old hexagon timer isn’t helping much.

It could have something to do with the fact that I’ve been cooped up in the house more than usual, considering the large amount of snow we’ve been getting here in Flagstaff.

Kinda weird when I think about it, because I’m already a homebody by nature. But there’s something different about the energy when you’re stuck home and it’s not really your choice.

I mean I could go out… but this was my car last week, under about a foot of snow. 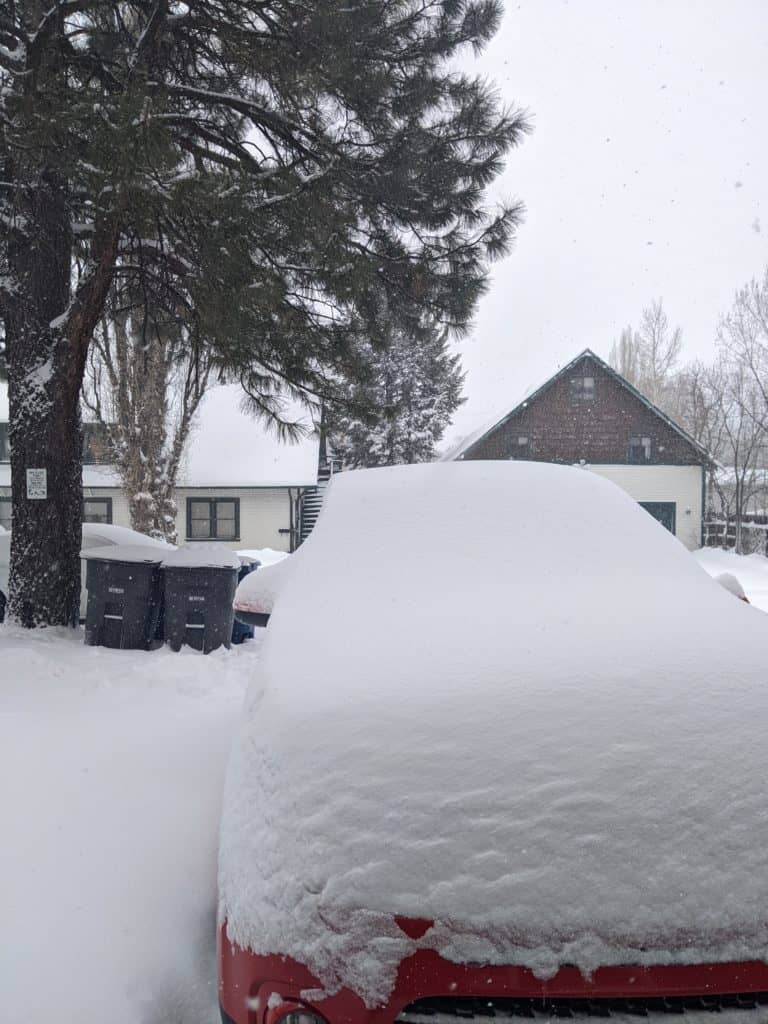 And before my friends “up north” make fun of me… only the main roads have been getting plowed (i.e. not my street) and I don’t have snow chains. Therefore, stuck at home unless I want to walk in it.

Then the Catch-22… I’m so bored out of my mind being at home that even with the extra time to do work, I don’t do the work.

Last week my amazing coach Brian (contact him here – you can and should absolutely hire him, so long as you don’t take him from me. I will fight you.) shared his trick with me.

“Just commit to two minutes,” he told me. And that hit me so hard I wrote it on a post-it note and attached it to the wall right above my computer monitor.

Over the past several days, whenever I’ve experienced that moment of overwhelm that happens immediately after any thought of “I need to get X done,” I’ve sat down and told myself, “just two minutes.”

I did that yesterday and suddenly realized I’d been writing for three hours. I blame the blasting Disney tunes for losing track of time, naturally.

If you’re struggling with your own focus, maybe give Brian’s trick a try. Yesterday I finally got something done that I’d been putting off for weeks, because I started with just two minutes.

There’s a school of thought that says emotion and business don’t belong in the same sentence. I think that’s a load of BS. Passion and emotion are how we connect, person to person… and that’s why I love Dr. Kristen Donnelly’s approach to empathy.

She says it’s a skill, not an emotion… and as someone who’s learned how to be empathetic through A LOT of trial and error, I totally agree. Our discussion is a fascinating look at the many different ways you can develop and use this vital skill in your business.

Listen now to find out how to level up your biz AND your life.

Wanna see some pretty pictures? I put up a whole bunch of them over on my blog. Last week I finally finished my post about my sunrise trip to Mesa Verde National Park. 10/10 would recommend. Beautiful. Drivable. Accessible paths to many of the historical sites. Totally worth being up before 6 am in order to catch the sunrise.

I was talking to my mastermind group last week and wound up telling this story… and as soon as I finished they demanded I send an email about it LOL.

Once upon a time I joined an 80s hair metal cover band. I was super stoked, because the ad I responded to on Craigslist (is that still even a thing?) had a picture of Steel Panther, one of my favorite parody bands.

Side note: Steel Panther is to hair metal what Weird Al Yankovic is to pop music… except they do mostly original music making fun of the whole sex, drugs, and rock ‘n’ roll lifestyle, and they’re larger than life caricatures (and also gross. LOL).

So when I joined I was THRILLED. I was totally looking forward to wearing some zebra stripes and a big tricked-out 80s wig. Maybe even some rad makeup (Jem and the Holograms, anyone?).

One day at rehearsal we were grooving pretty damn good on “Panama” by Van Halen when suddenly the lead guitarist stopped the song mid-chorus and turned toward me.

“David Lee Roth sings that line like this…” he explained, flawlessly executing a note-for-note vocal run that he wanted me to emulate.

“I think they’ll know I’m not David Lee Roth,” I told him, pointing to my chest. “There are a few obvious differences between us.”

“People come to see us perform their favorite songs, and they want it to sound like the record,” he told me.

“People come to see US perform, and if they wanted to hear the studio version, they can always listen to it in the car or at home. Live shows are a totally different vibe,” I said.

Needless to say, we didn’t work out. Not too long after that rehearsal, I dropped out of the band. I was looking for fun, not obsession with perfection.

When the guitarist called to talk to me about why I’d suddenly dropped, we discovered the root of the problem…

It had to do with the fact that he’s originally from Peru. When he chose the picture of Steel Panther for his ad, he had no idea who they actually were. He just looked for an image of an 80s hair metal band and stuck it in.

But I, being a fan, read more into the ad than he meant for me to see. I was picturing over-the-top antics, a real “grab ’em by the face” show. He was wanting serious musicians (which I am… but within the context of having fun while making music).

This, my friends, is a message to market mismatch… all stemming from a big misunderstanding.

And no matter how hard we tried to make it work, we had different goals.

We made an EXCELLENT band. He absolutely found phenomenal musicians.

But I wanted fun and he wanted perfection. It was like trying to fit the proverbial round peg into a square hole… it wasn’t going to happen unless the carving tools came out and things got messy.

I see this happening all the time in marketing, where a company is going for a certain vibe with an ad or an email or a campaign and it falls flat (if not bombs entirely). And usually there’s something like this, a Steel Panther vs perfection message, underlying the whole thing that confuses your ideal prospect.

It’s OK to be who you are. Just know who you are, and show up as you everywhere you operate, every day.

In honor of my failed hair band experience, and the fact that it’s been four years since this happened… I bring you a brief clip of my cover of Sweet Child of Mine by Guns ‘n’ Roses.

For full context, Brian (my coach mentioned in the first section), my friends Dan and Emma, joined me at a local live band karaoke bar that was walking distance from the Airbnb we all shared in Medellin, Colombia. The band knew exactly five songs in English and they were all hair metal. But it was fun how in the moment, making the music, we all spoke the same language.

She’s got a smile that it seems to me
Reminds me of childhood memories
Where everything was as fresh as the bright blue sky
Now and then when I see her face
She takes me away to that special place
And if I stare too long, I’d probably break down and cry