I think I’m locked in an epic battle of wills.

It started the first week I was in Flagstaff. We got hit with a few inches of snow. Since I wasn’t planning on going anywhere, I decided to just let the snow accumulate, figuring with the house’s southern exposure it would all eventually melt.

Along comes nice neighbor Eric. I hear loud scraping outside in the morning and he’s out there in the standard Arizona Winter Uniform(TM) of cargo shorts, a hoodie, and socks with sandals, clearing a path around my car, and from my doorway to the sidewalk.

So I popped my head out and said, “hey you don’t have to do that, but I appreciate you!”

“It’s really no trouble,” he assured me. “I’m already out here doing it for my half of the driveway.”

A couple days later I had the opportunity to return the favor… and he and his very visibly pregnant lady came back from a walk around the neighborhood to find me scraping ice off their stairs. Thanks, promise of future help, yadda yadda… and they retired to their apartment.

Then a week or so later, the BIG storm came along and dumped around 15 inches of snow. Sure enough, Eric was out there again (though this time in pants and boots), shoveling. No easy feat considering the flurries and wind.

That same week, he and his lady disappeared for a few days. I found out through my Airbnb host that they’d welcomed their baby girl into the world.

So last weekend, after I treated myself to Death on the Nile at the local Harkins Theater (best popcorn I’ve ever had at a movie theater – seriously, I think they put crack in that)… I stopped by a Walgreens to get some essentials for me, and decided on a whim to get them a card and an Uber Eats gift card as a congrats.

But the escalation of niceness struck me as oddly hilarious, so I wanted to share.

I jotted a quick “congrats on the new baby!” inside the card and snuck it under the patio door in case they were squeezing in a quick “we’ve got a newborn” nap.

A few hours later I was watching Moana for the 50th time and making dinner, and Eric stopped by to thank me and invite me to join them on their next walk around the neighborhood.

I’ve got less than a week left in AZ. Now taking bets on how far and fast this will escalate before I move on to Las Vegas…

My guest last week was Leticia Latino, who comes from an entrepreneurial family. Rather than join the family biz, Leticia wanted to go out on her own and make a name for herself. She realized that if she was going to work hard, it had to be for something that was important to her as a person.

On her own, Leticia found a lot of success… and also a ton of challenges. When the massive company she worked for started to go under, she knew she needed to make a change. That’s how she wound up making her way back to the family business and found the power she needed to be in control of her journey.

Listen now to find out how following your values in business can put you in control of your entrepreneurial journey.

As I mentioned above, this week is moving week. I’ll be packing up the car and the cat and heading to Vegas on Friday.

No, I’m not a big gambler… unless your idea of gambling is deciding “I’m comfortable losing $40” and playing slots until it’s gone.

Originally I was going to Vegas to join my friend Raven for weekends with Adele at Caesar’s Palace. Who knows what’s going on with that show anymore?

Rather than rearrange everything I decided to keep the original plan, Adele or no Adele. I’ve only ever spent time in Sin City as a weekend or overnight trip, where all we really did was hang out on the strip. I’m excited to experience it like a local and see what fun things I can find.

I already found one fun thing that I’m incorporating into my in-person Eat. Play. Launch. event at the end of April… driving bulldozers and backhoes.

I’m excited! And of course if you have recos for food and adventure, I’m always open to ideas.

Today I wanted to talk a bit about differentiation.

There’s a lot of the same ol’ same ol’ out there. I meet “email marketing specialists” and “launch experts” every day of the week.

But not everyone knows how to stand out. This is fresh on my mind after a weekend trip to Sedona. And let me tell you, folks in Sedona get doing things differently.

The immediate thing that stood out was the preponderance of Pink Jeeps. They were Ev.Ver.Ry.Where.

They basically do off-road tours to a lot of the natural wonders surrounding Sedona, like Cathedral Rock and Devil’s Bridge.

Then next door to the coffee shop where I stopped to do work? I found an amazing rock ‘n’ roll themed clothing store where I bought a couple bitchin’ scarves. Very different from the “Pretty Woman” (yes that was the actual name) store in the same shopping complex.

Then there was this random-ass house on a cliff that I’ve been obsessing over all week and yet CAN’T FIND DETAILS ON HOW TO GET THERE. 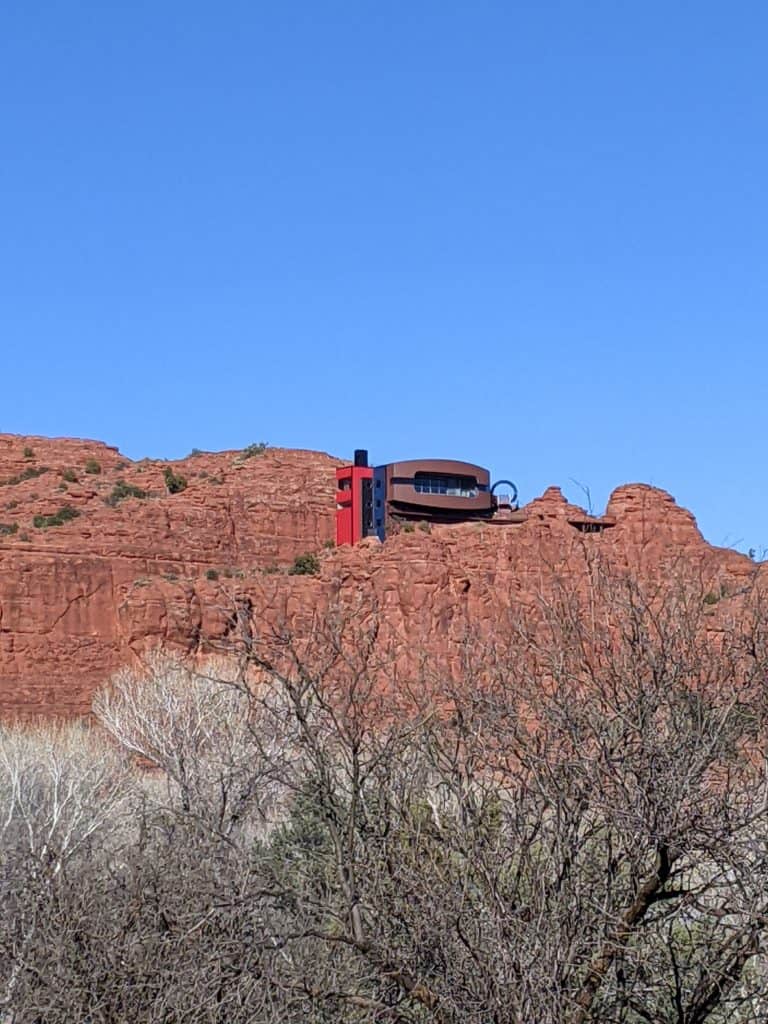 This one has the community seriously divided on whether it’s an eyesore or not, but there’s no one debating how much it stands out and gets attention.

It could be looks, or theme… but if you’re not deliberately standing out from the crowd, you’re doing your business a disservice.

My mom got me hooked on Sirius XM radio when I was home over the holidays.

It came in handy this weekend when I was driving to Sedona… in the mountains when the signal cut out on both my phone and the radio, I still had the 90s on 9 station to get me through all the twists and turns in the road.

And since Sedona was in spring (while Flagstaff is still 20+ degrees colder), it was a windows down kinda day, driving through the mountains and belting out Let Her Cry by Hootie and the Blowfish.

She sits alone by a lamp post
Tryin’ to find the thought that’s escaped her mind
She says, “Dad’s the one I love the most
But Stipe’s not far behind”

She never lets me in, only tells me where she’s been
When she’s had too much to drink
I say that I don’t care, I just run my hands through her dark hair
Then I pray to God you gotta help me fly away

And just let her cry if the tears fall down like rain
Let her sing if it eases all her pain
Let her go, let her walk right out on me
And if the sun comes up tomorrow, let her be, let her be