It’s funny to me how you never really know what will connect with people.

Even being in marketing as long as I have… most everything I put out there is an educated guess. I’m never 100% certain how people will react.

People are predictable only to a point. Beyond that, who knows what will happen?

This is fresh on my mind because of a post I made this weekend.

Folks have been asking me what’s next on my journey, and I told them “heading to Flagstaff, AZ”. And while that’s technically true, it kinda glossed over my REAL plan.

I hesitated to share the actual plan because I was embarrassed what they might think of me if I told the straight-up truth.

On a whim, I threw it out there: 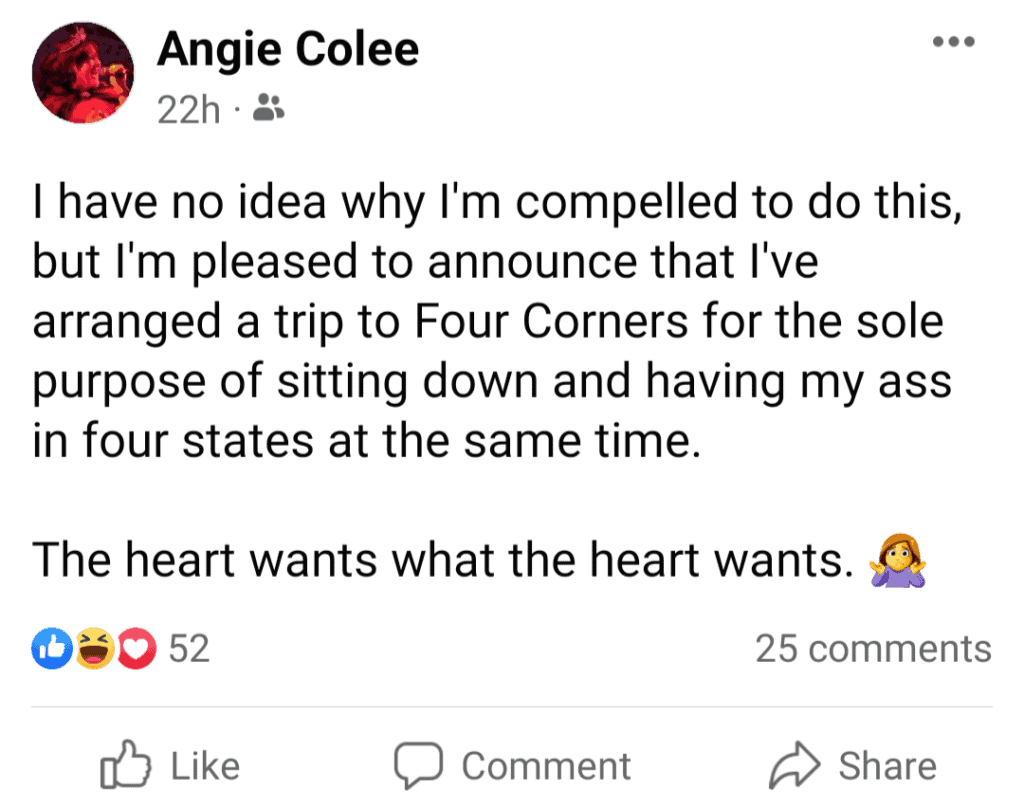 Image is a screenshot of a Facebook post I made, and says, “I have no idea why I’m compelled to do this, but I’m pleased to announce that I’ve arranged a trip to Four Corners for the sole purpose of sitting down and having my ass in four states at the same time. The heart wants what the heart wants.”

Turns out my strange dream is one shared by many of my friends. Friends who are now excitedly waiting for pictures and living vicariously through my awkward whims.

And sure there are probably people out there who unfollowed me, or saw it and thought “what the actual fuck, Angie?”

But(t) I’m all about having fun. LOL

Why else would I be on this journey if I let others’ opinions of what I want stop me from doing things, even if those things are silly?

Here’s an unpopular truth — when starting a business, most people don’t know exactly where they’re going. Last week’s guest, Chrys Clay, didn’t let the fear of the unknown stop her from finding the freedom her corporate job left her wanting.

Instead, when she wanted to leave her job but wasn’t exactly sure of the path… she made her own!

She kept her focus on moving forward, which helped her find confidence and success as an entrepreneur. Listen to this episode to overcome any obstacle in your way (even if it’s simply taking the first step).

Plans change. That seems to be the theme of this month, at least in Angie-land.

For full context, we gotta time travel a bit. This was back in November… I was relaxing on mom’s couch when my phone buzzed with a text:

It was my friend Raven: Adele is in concert at Caesar’s. This is not a drill.

Me, not even ten minutes later: I am SO down.

We chatted a bit about logistics before she popped off with: I love how I texted “Adele’s in concert” and you’re like “Yes.”

Me: You know the way to my heart is a damn diva <3 Also food.

Raven: Also yes, food. ‘Cause we are going to eat.

Fast forward to now: originally I’d been planning to go from Texas to Santa Fe (where I currently am) to Flagstaff to SoCal. When Raven got the tickets, I changed the plan to head from Flagstaff to Vegas instead.

Now if you follow Adele like we do, you might have heard that last week she indefinitely postponed her Caesar’s Palace residency. Between COVID challenges and crew shortages, the show just wasn’t ready to roll.

That leaves me with an interesting dilemma – return to the original SoCal plan or continue with the Vegas plan in hopes that the concert happens at some point while I’m there.

I haven’t landed one way or another just yet. But that’s what I love about life on the road… if one plan doesn’t work out, there’s always another adventure waiting to be discovered.

Can we talk about something that’s been annoying me lately?

I don’t know if it’s because I travel everywhere in my car, so I spend a lot of time on the road or what…

But lately I’ve been seeing a shit ton of these bad boys:

Image is a billboard that says, “Does Advertising Work? JUST DID!” with an 888 phone number below.

But this just reminds me of newbs in copywriting groups that think ye olde “SEX! Now that I have your attention…” trick is the epitome of attention-grabbing brilliance.

The billboard catches attention. No one is arguing with you on that score.

But I AM absolutely arguing that getting attention is NOT the point.

Getting people to ACT is the point.

Otherwise you’re spending a fuck ton of money to get two seconds of their attention, only to have them return right back to their normal life.

I’m not saying that this billboard isn’t catching business owners’ or advertisers’ attention out there on the road with their rainbow letters and pithy message.

But the other half of the equation – the key half – is getting someone to call and pay to book a billboard.

And billboards really work for a few types of businesses, because you have about 2-3 seconds for them to take in your message before that 70+ MPH car takes them out of sight and out of mind.

Never forget the main goal isn’t to get their attention. It’s to get them to take action.

Getting attention is a natural precursor to the ACTUAL goal – and so many people get stuck there and miss the point.

Fitting in with today’s random travel stories, I bring you Ramblin’ Man by The Allman Brothers.

I’m on my way to New Orleans this mornin’
Leaving out of Nashville, Tennessee
They’re always having a good time down on the bayou
Lord, them Delta women think the world of me