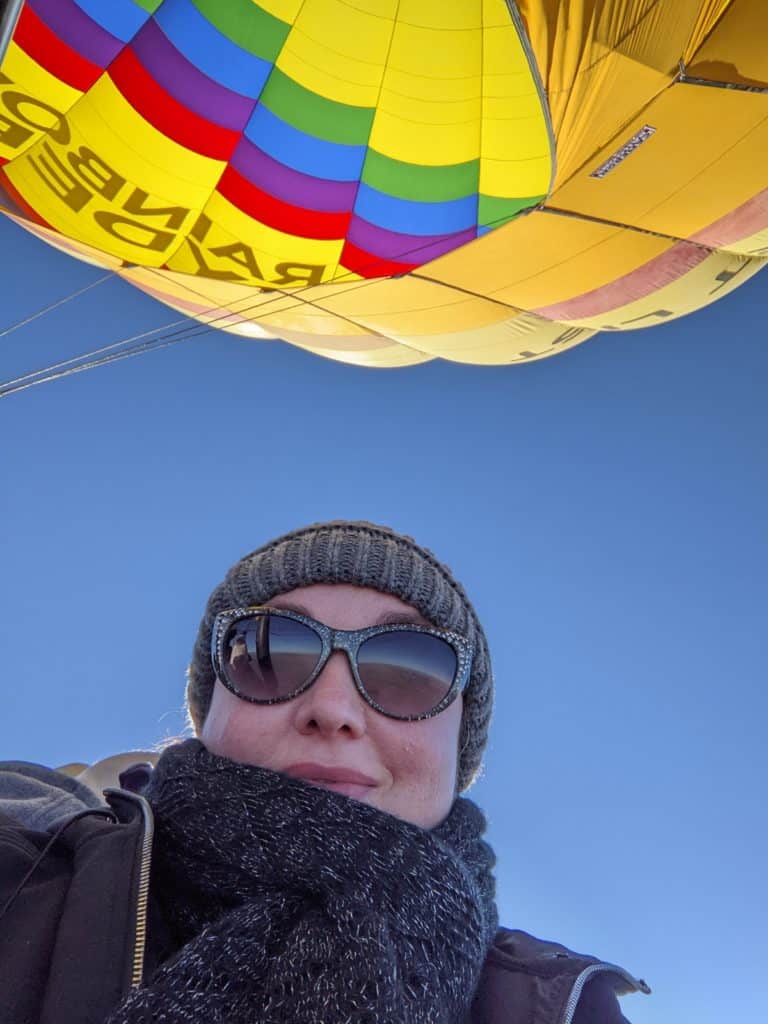 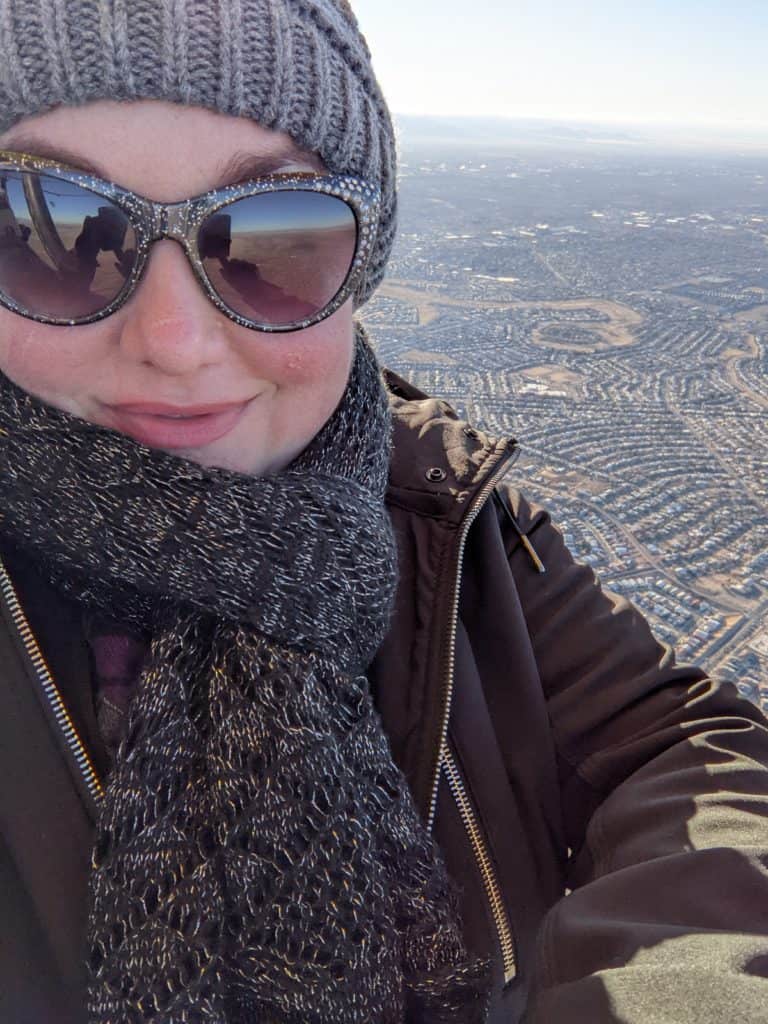 In case you can’t see the images above, that’s me in a hot air balloon suspended over Albuquerque, New Mexico just after sunrise.

I’m glad I waited to Google “hot air balloon accidents” until after I got back down on the ground safely.

I mean, I had an inkling of what I was signing up for when the waiver form I signed actually detailed about 3 dozen ways this could go wrong. Actual examples from the disclaimers:

“fires in the balloon basket”

“collision with obstacles on the ground or in the air”

“arrest for trespassing or other violations of the law”

I don’t know what I expected, other than it would be cold AF. It snowed here in Santa Fe on Thursday night, so I had to get up extra early, clear all the snow off my car, and dodge snow plows in an attempt to drive the 60-ish miles to the balloon launch site.

It was indeed cold AF. But there was also magic in the air, I’m telling you. Seeing the sun rise over the mountains, quietly gliding along and watching the world pass beneath you, meeting strangers who are all excited and bonding over a shared experience…

In short, if you have the opportunity to hop in a hot air balloon, do it. Better yet, invite me. I’ll totally come with!

Last week’s guest is Whitedove Gannon, who has a special skillset that isn’t as valued in business as it should be — awareness. Sounds a little “woo” or meditative, but when you seriously apply this in your business (and life) you can change the freaking world if you want to.

Listen now to find out why awareness is the permission you’ve been waiting for to do something great. Lots of good old-fashioned ranting in this one too – it’s amazing.
____

BONUS: I had the extreme pleasure of being a guest on the Back 2 Basics podcast with Leticia Latino. Somehow we packed up my whole life and business journey into a tight 40 minutes, including all the things I tried and failed at before finally finding my way. Click here to listen and get a massive jolt of kickass “YOU CAN DO IT!” energy.

Turns out I made myself a couple “balloon buddies” last week! I met a lovely mother-daughter duo (hi Susan and Matty!) who had flown into town to do a bucket list/birthday hot air balloon ride, and then explore Santa Fe.

Since I am in Santa Fe, I gave a bunch of recommendations of places to see (and things to eat). And not long after the balloon touched down, they invited me to breakfast. Uhh… you don’t have to ask me twice!

And the happiest of coincidences: they’re big foodies too. They found an epic breakfast spot and we had the loveliest conversation until I had to dash to take a meeting. We exchanged numbers and promised to keep in touch.

I don’t usually get my hopes up in situations like that, because sometimes life happens and intentions fall by the wayside. But I was incredibly pleased when Friday evening, Susan texted me to invite me to dinner on Saturday.

We found another foodie spot and I was introduced to the glory that is “shrub”.

From liquor. com, in case (like me) you are unfamiliar with “shrub”:

A shrub, often referred to as a drinking vinegar in its nonalcoholic form, boasts both flavors. Cocktail shrubs combine water, fruit (and sometimes other botanicals), sugar and vinegar to create an acidic syrup that adds depth and complexity when mixed into a cocktail.

The drinks and food were excellent, our server phenomenal, and the company divine. We talked until we realized we were the only customers left in the restaurant, and left to big hugs and a promise to meet up again when my travels take me nearby.

All that to say… sometimes I’m blown away by the beauty and coincidence of life. I’m glad I’m on this journey.

Here’s something I love sharing with my clients:

A customer service challenge is often a revenue generating opportunity in disguise.

I first learned this from Dan Kennedy at one of Brian Kurtz’s Titans events. Dan is widely regarded as one of the geniuses of direct marketing and sales, and Brian is a brilliant marketer in his own right.

Incidentally, Dan is a Disney nerd like someone else you might know (me. It’s me). He shared a story about pin trading, which is this hobby a lot of Disney fans have of collecting and trading enameled pins with each other and the cast members at the parks.

The pins have these little rubber backers shaped like mini Mickeys. Sometimes however, the backer would fall off and the pin would fall.

Lots of collectors were unhappy with this. And the company had two options: redesign the pin fastening system, which is time consuming and really expensive. Or…

Turns out that actually solved the problem – because the avid collectors could have extra backers on hand in case they lost one, and keep on keepin’ on. And the company didn’t have to invest a shit ton into R&D to redesign thousands of pins.

Something to think about next time customer complaints leave you momentarily frustrated. Is there an opportunity in this?

Continuing with our travel theme, this week I bring you Roam by the B52s.

Fly the great big sky
See the great big sea
Kick through continents
Busting boundaries
Take it hip to hip, rocket through the wilderness
Around the world the trip begins with a kiss