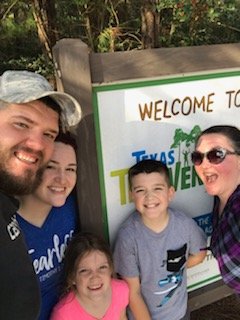 Something weird happened in the cosmos this year. Each adventure I originally planned with my siblings was canceled. One for a death in the family of the headlining band, and the other for COVID concerns.

Dianne (sister) and I had planned on going to see a Broadway-style production of The Little Mermaid in downtown Houston.

Two days before we were slated to go, they started cancelling shows due to the latest variant of COVID – and sure enough, wound up cancelling the rest of the run.

We saw it coming, but that still didn’t make the recovery plan any easier.

The challenge is, my sis (as she herself will admit) gets overwhelmed with options and has a hard time making decisions sometimes.

It’d already taken a couple weeks for her to think up The Little Mermaid, and when that was canceled, we knew that trying to plan for another show was probably not a great idea.

I kept inviting her to hang out in hopes I’d throw enough articles and ideas her way to pique her interest.

Once we even had a Christmas coffee flight, which was a first for me and surprisingly tasty. 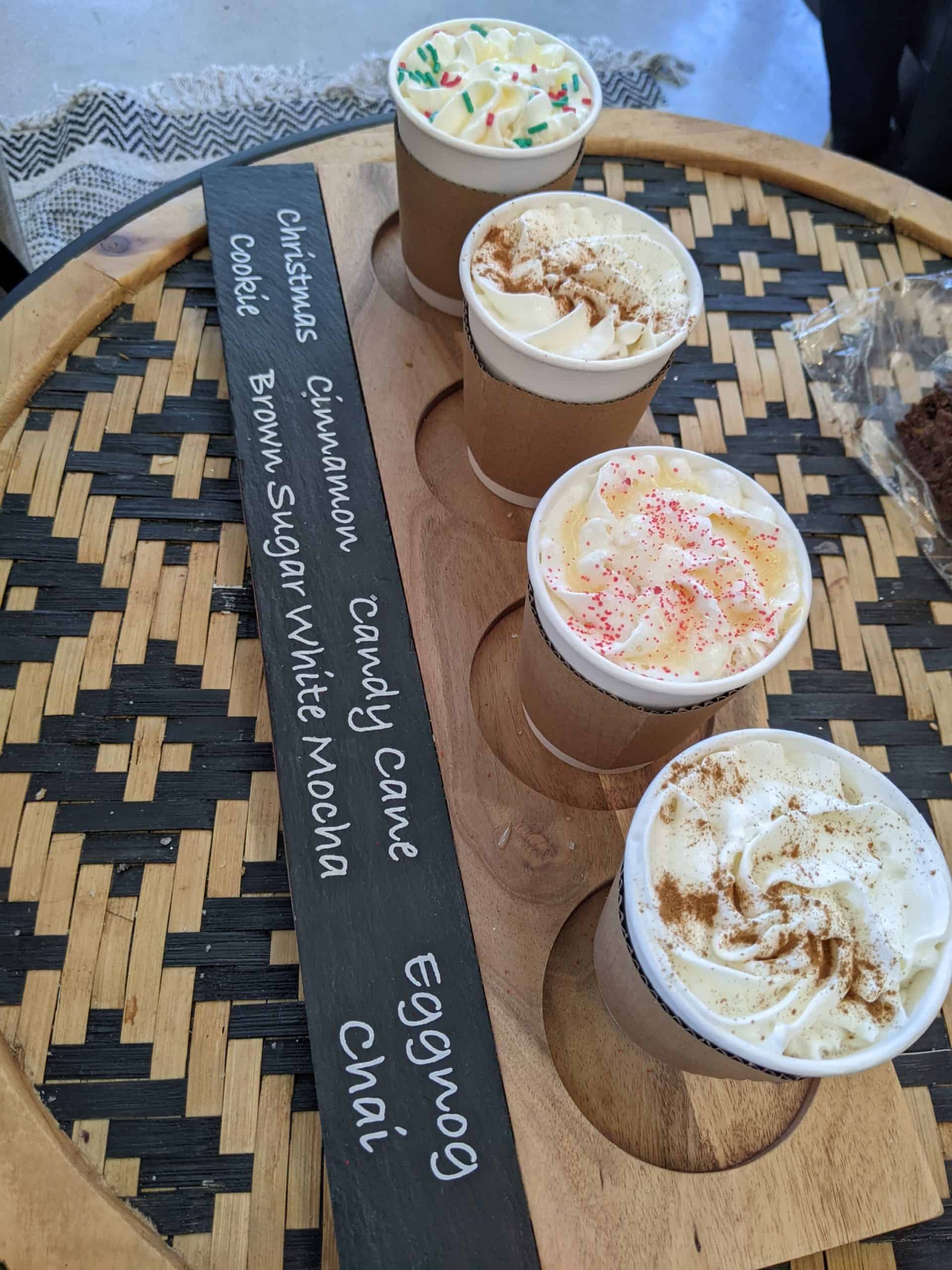 While sipping coffee I was surfing for adventure options yet again and mentioned a zip line course I’d found (this will be relevant in a few minutes).

Time was running out at this point… I was slated to be in town through the end of the week, but would be packing up to leave for Santa Fe come New Year’s Day.

And of course when I made the mistake of mentioning zip lines out loud (my niece and nephew love the one in my mom’s back yard), they loudly chimed in wanting to go.

So it was decided: ziplines for the final Christmas adventure!

I quickly booked tickets for New Year’s Eve day and didn’t think about it again until I was getting ready to head out Friday morning.

I briefly considered grabbing breakfast before making the 1+ hour drive, but thought to myself, “hey we’ll be zipping through the treetops… how hard can it be?”

Using that same logic, I’d dressed in jeans and a warm shirt. All of these decisions would prove to be mistakes.

Only one of those two things involved blithely zipping through tree tops. The other involves way more ab and arm work than I ever thought possible. Also, a near constant battle with your own brain – turns out there are two sides… one that says “hey, let’s go… it’ll be fun, and we’re strapped in and can’t possibly fall” and the side that says “FUCK YOU WE’RE GOING TO DIE LET ME OUT DEAR GOD GET ME OUT OF HERE”.

Basically there would be minimal sit-and-zip. We were there to climb our asses off. 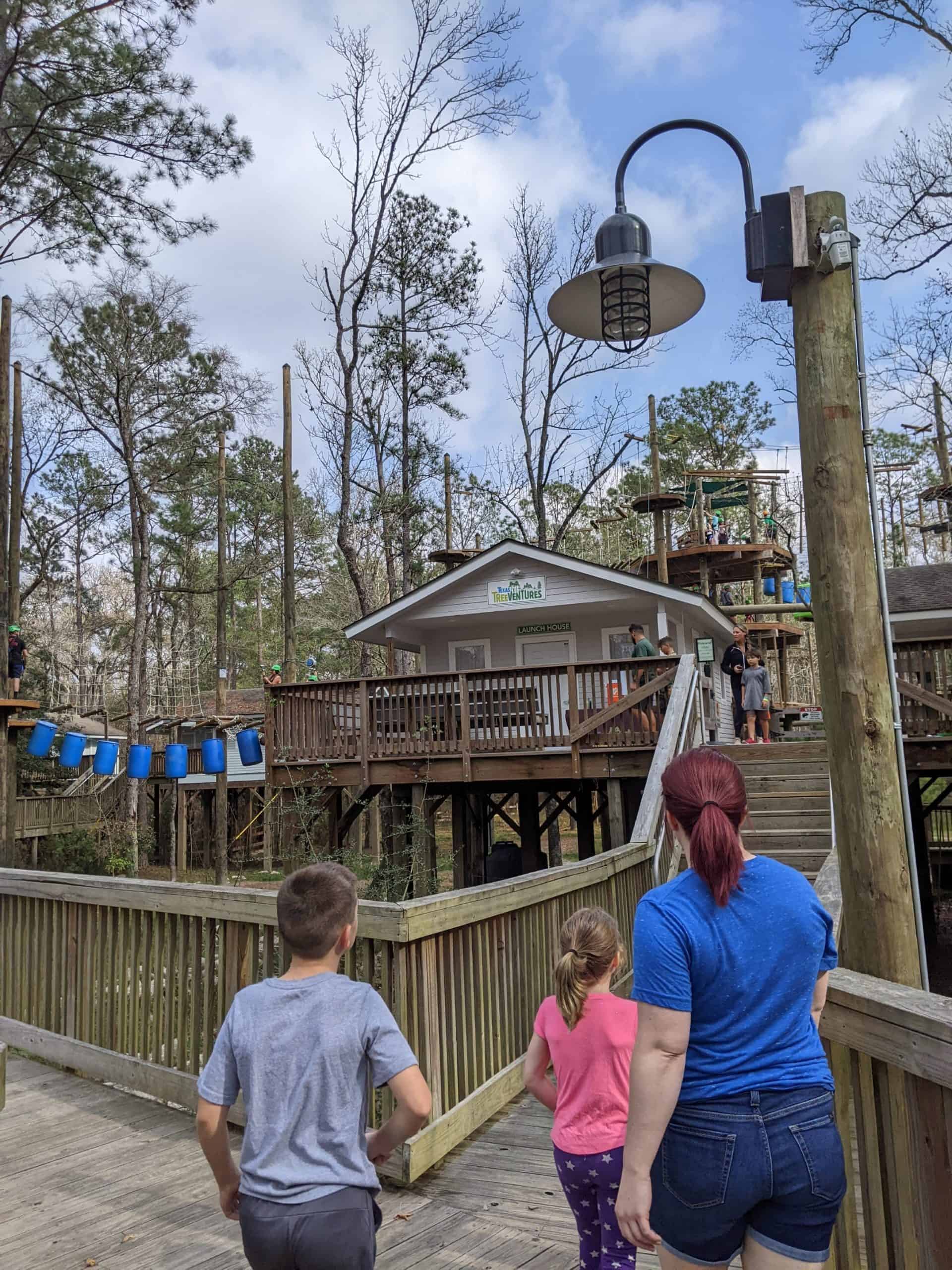 We got strapped into the harnesses, helmeted up, and went down to “tree school” to learn how the belay/harness rigging worked to keep us safe. And I apologize in advance – I had to leave my phone in the car, so the few pictures I do have are from my brother-in-law’s phone. 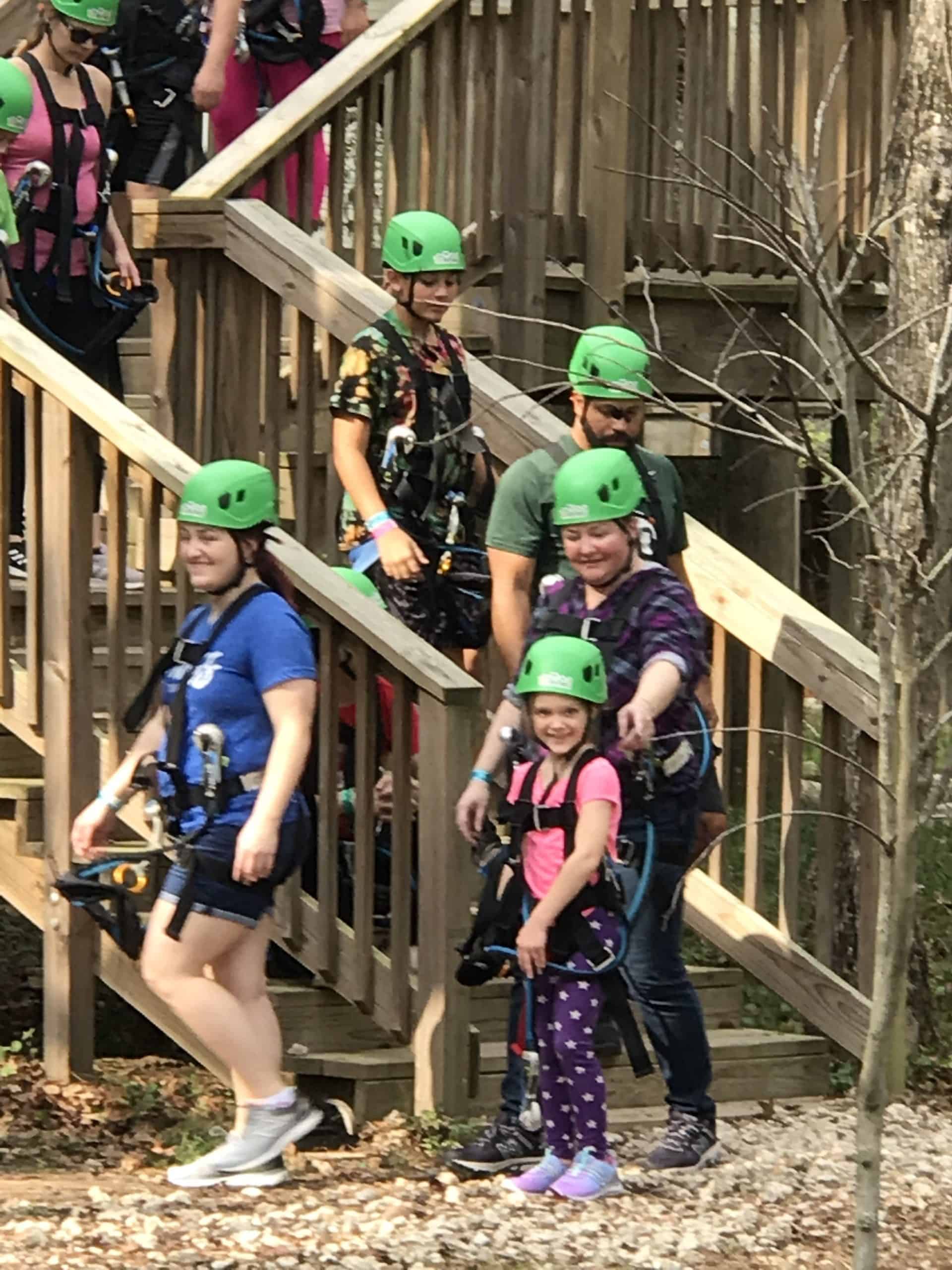 Shortly after graduating from tree school, it was time to actually get on the course.

My niece set off with my sister, while my nephew hung back with me.

There was a rope-and-plank bridge probably 10-15 feet long between the “launch” platform and the main hub. That’s where my niece full on melted down – stepping onto that first rope bridge. 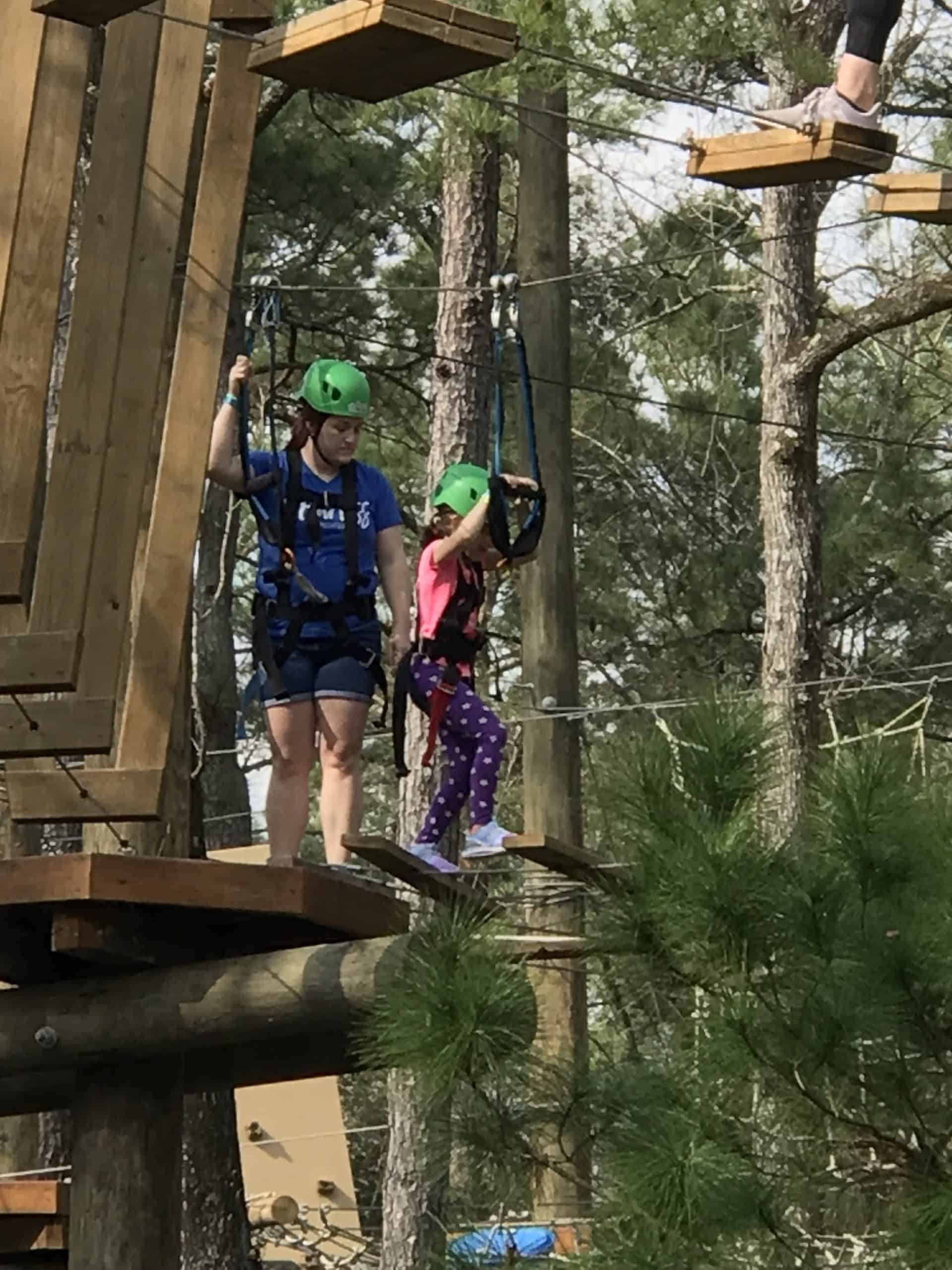 She started off strong, too!

Poor baby was so scared and teary-eyed. No amount of the instructors showing her she couldn’t fall would console her, so she wound up going with her father to watch from a shady area.

My sister, free from children, took off like a spider monkey. 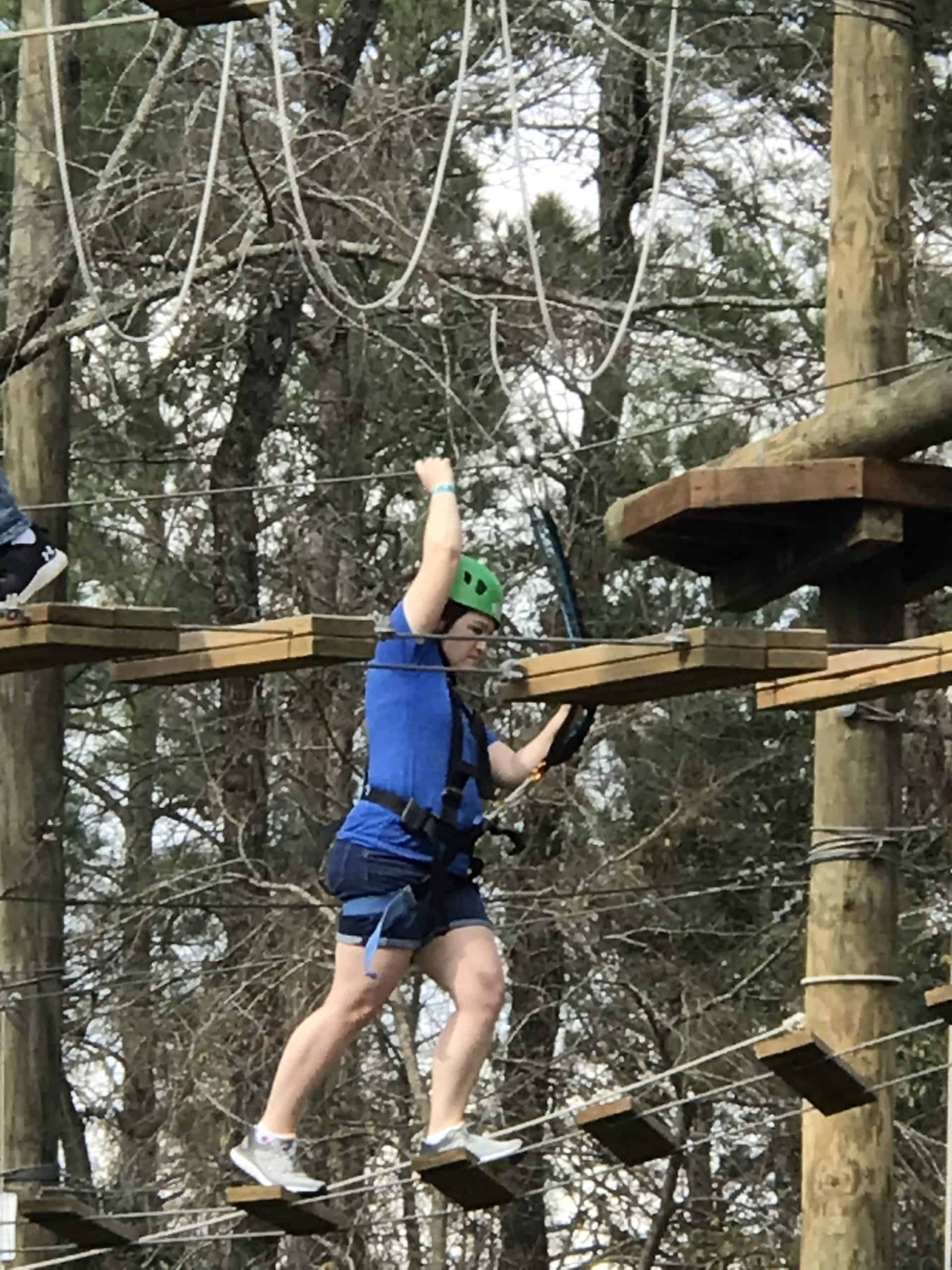 Meanwhile, I helped my nephew start across the rope bridge. He made it across alright after a lot of convincing… but when we made it to the second obstacle, had a similar meltdown. 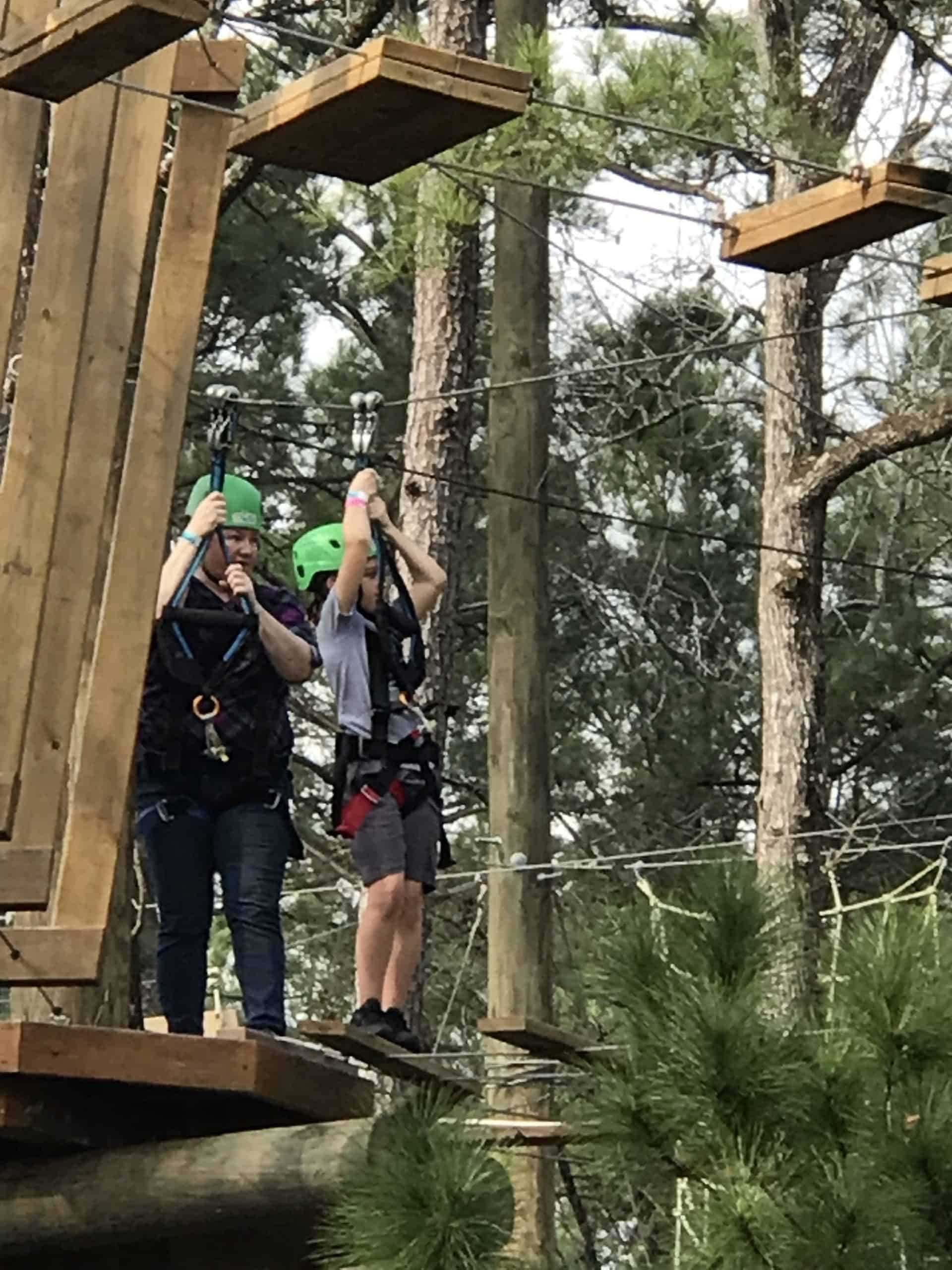 Thankfully one of the ropes course instructors called to him and said, “hold up little dude… I’m on my way. I want to show you something!”

The instructor made it about halfway across a tightrope before dramatically letting go and plunging backward.

My nephew gasped in horror… and then burst out laughing as the instructor fell approximately two feet before his harness kicked in. He spent a few seconds gleefully swinging from the harness and telling my nephew that the worst that happens is you get to swing for a bit.

With renewed determination, little man made it across, loosened up, and really started to get into it. 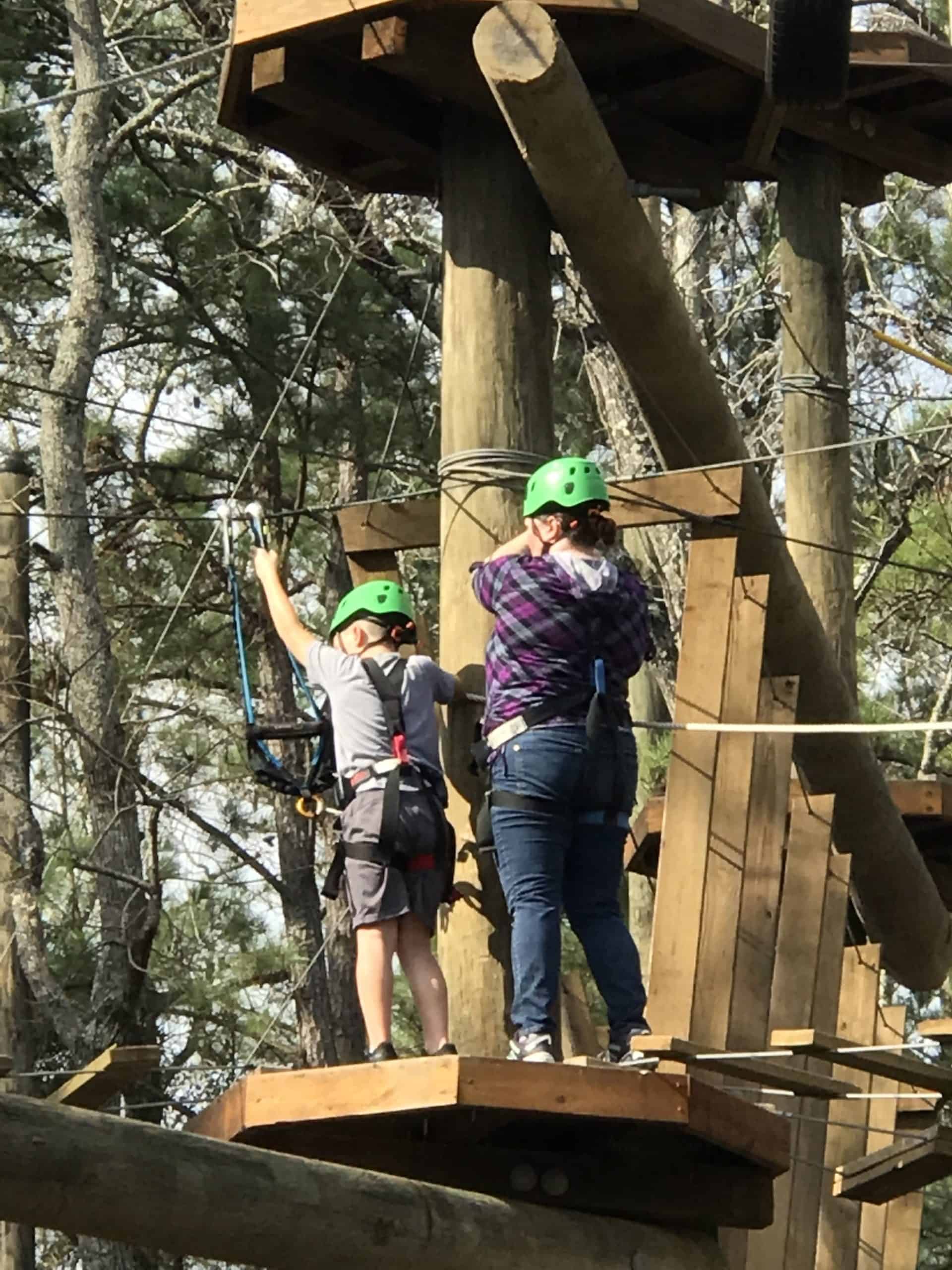 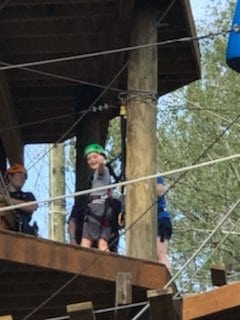 … but I do have a huge problem with tightropes, tire swings, and really anything that moves fairly freely.

I practically sprinted across the many logs. But when I stepped into a suspended kayak and “surfed” my way through the trees, I was hauling myself along while internally screeching “I DON’T LIKE THIS I DON’T LIKE THIS” 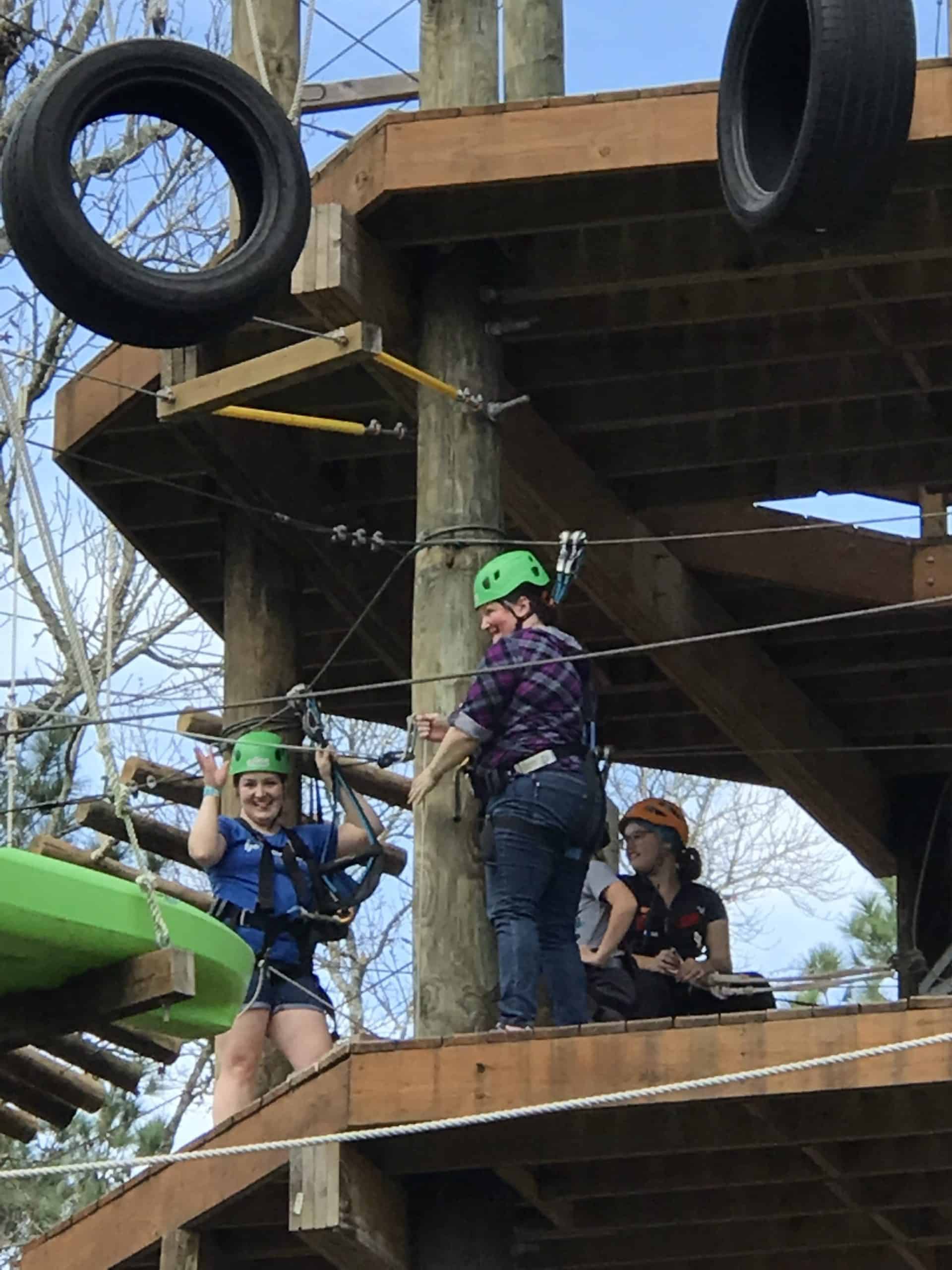 Avery (nephew) and I stuck together, slowly making our way through different obstacles. Meanwhile sis was still ninja warrior-ing through the treetops, trying a bunch of different challenges and also shrieking “I DON’T LIKE THIS” on a few of the more swing-y ones. 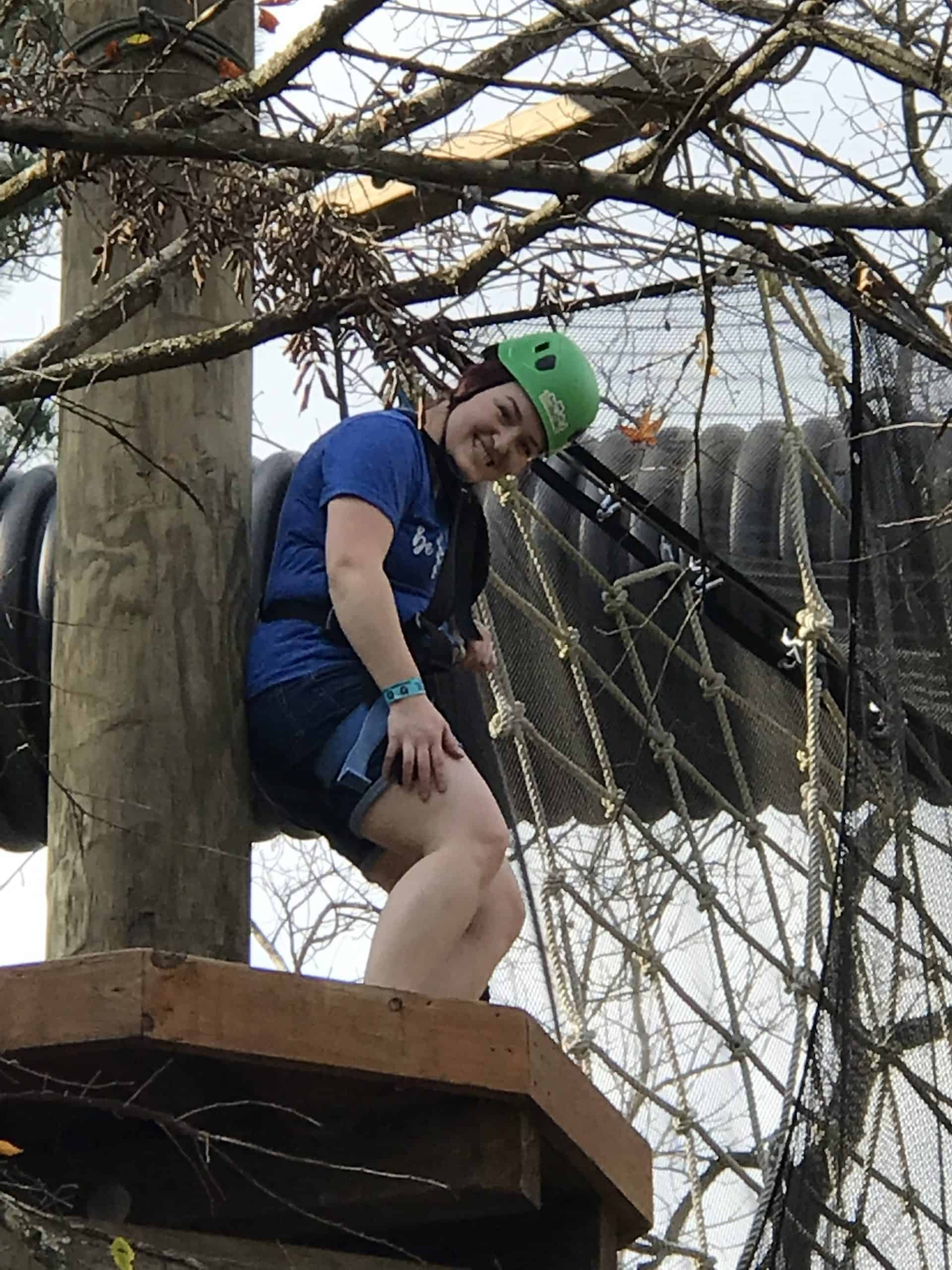 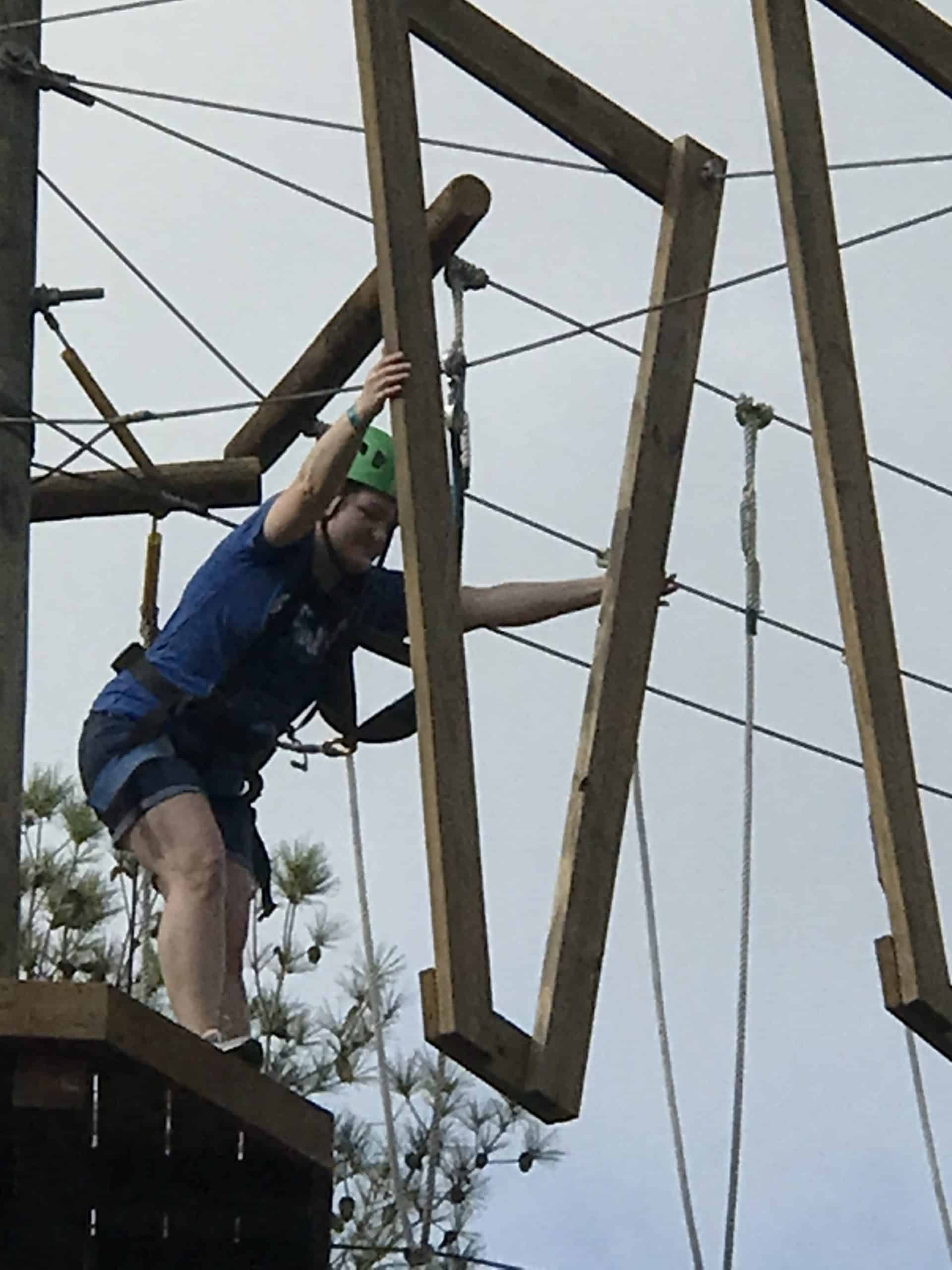 At one point I convinced myself I could probably “zip” across one of the more challenging obstacles and told Avery to watch me. This would prove to be a mistake.

There would be no zipping. There would only be awkwardness as I pulled myself to the next platform and figured out how to wrangle my body back into a standing position (surprisingly hard to do).

I should pause for a second to tell you about something called the “True Blue”. There were several of them suspended at strategic places throughout the course, and they were designed to get you out of the course as quickly as possible without having to backtrack through multiple obstacles.

In case you didn’t already figure it out, by “gets you out as quickly as possible” I mean “jump off a platform 20+ feet in the air and trust this thing to lower you down”.

My sister desperately wanted to try it out. Before I knew it, she was jumping off a platform a level above us and sailing her way down to the ground.

When she rejoined us on the central platform, she pointed to a suspended black tunnel a couple levels up and said “I want to try that!”

I agreed it looked fun so we each plotted different courses to get there. This time Avery went with her and I monkeyed around on my own a bit.

I managed to make it to the tunnel platform but there was a traffic jam so I had to wait (only 3 people were allowed on a platform at a time, and only one person could be on an obstacle at a time).

My waiting buddies were a young boy of probably 8, and his grandpa. The boy happily trounced across the obstacle to the platform where I was standing, and I helped him clip into the platform so he wouldn’t backslide. His grandpa followed, one painstakingly slow step at a time, while kiddo giggled.

Once grandpa was about halfway across, I told kiddo, “wait for him here… I’m gonna go through this tunnel.”

Folks… there is nothing graceful about a full-grown adult hands-and-knees crawl-scooting through a tunnel that’s just about 4 feet in diameter.

I’d scoot a few feet and sigh, “oh lord. Oh goodness” while kiddo peered into the tunnel and giggled at me. I made it all the way through to the other side and was just about to step onto the platform when kiddo bellowed into the tunnel, “Hey can you help me help grandpa?”

I began the surprisingly labor intensive process of trying to turn myself around in this tunnel (keep in mind it’s suspended in air and not at all stable… and I’m hooked into all kinds of gear and cables). After a minute of struggling with it, I did what any graceful young woman would do…

I laid down and used my feet to push myself/butt-scoot back the way I came.

Kiddo was dying of laughter as I scooted toward him. I got back just in time for grandpa to slip a little, get nervous, and reach out for a hand. I hauled him in, made sure they were clipped in, and went back through the tunnel.

I was aiming to get to the True Blue, as by that point we had about 15 minutes left of our three-hour adventure. But between me and the True Blue was my LEAST favorite obstacle of all… a series of swings.

Literally, picture stepping on playground swings that are all lined up in a row.

Now picture you’re doing that about 30 feet up in the air.

Yeah… there was a lot more “I DON’T LIKE THIS” shrieking as I slowly made my way across.

Thankfully I watched the two people before me strap into the True Blue and safely make it to the ground.

But it’s one thing to watch other people strap into a device and step off a platform and glide to the ground, and another thing entirely to do it yourself.

I didn’t have much time to agonize… time was up, and my brother-in-law was on the ground with his camera out, yelling for me to jump.

Earlier when Avery did his True Blue jump, I’d teased him for how dramatically he melted to the ground, flat on his back.

I am unashamed to say… I did the exact same thing.

The True Blue DOES slowly lower you down… after about 2 seconds of free fall. So you’ve got two seconds of panicky “what the fuck did I just do?” thoughts before the rigging kicks in and slows you down.

I got the pics and videos from my brother-in-law, and after three hours of probably the most intense arms and abs workout of my life, we were sweaty and smiling.

My niece even remarked that she should have stayed. We reassured her it’s OK to be scared, AND it’s OK to try again.

Since it was New Year’s Eve, they had to rush to the store before it closed to get supplies for their family dinner.

I rushed to the nearest convenience store for a protein bar, a PowerAde, and some Aleve.

I can’t recommend this highly enough.

I didn’t do it to be brilliant or weird or lazy or to save money – honestly what I spent on “adventures” was about even with what I would have spent on gifts and shipping and wrapping and whatnot.

It started as a way for me to convince my family I was truly happy without gifts, and turned out to be the best gift I could have given them (and myself).

I found a way to give time.

The true gift was making memories, having fun, and doing something out of the ordinary… together.

Nothing we picked was super expensive, either. It’s not like I treated everyone to a 5-star dinner at the Ritz. Of everything we did, the museum trip was probably the most costly, between the parking garage and 3 tickets to different specialty exhibits.

I can’t take the stuff with me, but the memories are something I’ll always have.

Those I’m happy to haul around with me on my travels.

So tell me – do you like the idea of an adventure for Christmas (or birthdays, or really any occasion where gifts are traditionally exchanged)? What would you love to do with your loved ones? Let me know in the comments!

(And to read the entire Christmas adventure story from the beginning, click here for part one.)