I have a confession to make:

Tech and I don’t get along.

Unless it’s super intuitive and gettable-at-a-glance, I tend to give all technological solutions a wide berth.

That’s not to say I’m a luddite – my smartphone is practically glued into my hand some days (an unhealthy habit, that’s for damn sure). And being able to access Shazam (the music app) and figure out what’s playing even when my phone’s locked? Heaven for a music nerd like me.

But if you start talking tracking pixels and tagging and code… I’m pretty sure you can watch my eyes glaze over like fog descending the mountains in San Francisco.

If you’ve never seen that, here’s what it looks like from a car window: 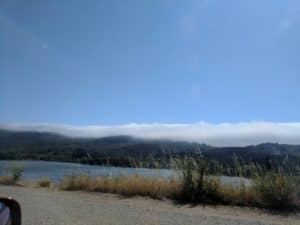 It just kinda… unfurls. Like unrolling a sleeping bag. Weird.

In my defense, I have good reason for being decidedly tech-phobic. I break things.

Like, I have a surprising talent for finding new and inventive ways to break things. This is why, when I DID live in San Francisco, I was actually a regular on-site tester for new products Google was thinking of launching. That was definitely an interesting gig.

I know how it works, in theory – but ask me to push the buttons to get you to the desired outcome? Fuhgettaboudit.

I noticed this habit in myself when I was talking to my (amazingly wonderful) assistant. Essentially, I’d hand over responsibility for figuring out all the back-end stuff to her. I’d just kinda dictate what I envisioned it working like, and left it to her to figure out the step-by-step.

But what I thought was saving me time and a massive headache from digging into shit I don’t get? I was actually shooting myself in the foot a bit – because I was creating systems I don’t understand, by proxy.

If anything broke and no one was around to help me, I (and my business) were dead in the water until the cavalry arrived.

It means I gave over control of whole parts of my business (and the decision making that accompanied it) because I didn’t want to deal with the imagined stresses of figuring out the tech. You do what I did, you’re getting close to the danger zone of not even really understanding how your own business works.

This whole thing became clear to me after two events:

The first was a Facebook ads training by my friend Mike Rinard (who is brilliant at that stuff, and you should go check him out)

He was walking me and a few other colleagues through the back-end setup of our Facebook ad accounts, and showing us how to set up different campaigns, tests, and audiences.

He’s the one I credit with first introducing me to that concept of abdication vs delegation – and said his whole goal in the training was not to make us Facebook ad experts, but give us enough capabilities and understanding to feel comfortable diving into our own data instead of blindly outsourcing everything to an agency.

The second happened not long after – I’d been dragging my feet on releasing a new training, a “mini course” on how I think through promotional strategies (and the simple pattern I saw repeating itself in all the multimillion dollar campaigns I’ve been part of).

Then a friend casually informed me she’d be conducting a new training and heavily featuring my site as an example. And my new lead magnet already had a link to the angiecolee.com/simple page I’d planned to use for my offer… I just hadn’t bothered to create the offer yet.

Suddenly I found myself in uncharted waters – my assistant was unavailable when I got my act together, and there was no one else to do the damn thing.

So guess who found herself in the back end of her website, in Thrivecart, and in MailChimp (that was annoying enough to inspire me to switch providers ASAP) building a promo from the ground up, tech and all?

There’s a reason I shared that link a couple times – and it’s not because I want you to buy it (though if you decide to, you are amazing and my new favorite person… and I really think it’ll help you).

It’s more to prove to myself… I did it. I built the thing.

And funny enough… I feel WAY better about delegating now. Because I actually understand what I’m asking folks to do, by merit of having done it myself. I also know I can go in and fix stuff (to a point) when the cavalry is off doing whatever cavalry does when it’s not charging.

So take it from a tech-phobe in recovery – you absolutely should keep it at a level of complexity you can understand until you can hire folks you trust to take it to the next level. But know your own back end.

Be a delegator, not an abdicator.

Posted in Life hacks, Mindset, Welcome to the Danger Zone